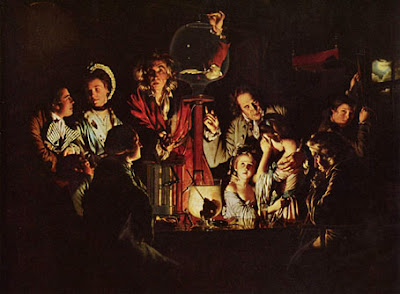 Hailed as the painter of the Industrial Revolution, Joseph Wright of Derby painted some of the most memorable scenes of the sciences taking hold on the popular imagination, such as his famous An Experiment on a Bird in the Air Pump (above). What makes Wright, born September 3, 1734, more than just a documentarian are the human elements he adds to the experiment taking place at the center of the action. To the left, two young lovers exchange glances beside the older gentleman caught up in the excitement of the moment. On the right, a father consoles his children, concerned over the fate of the bird. Add in the masterful, Caravaggio-esque chiaroscuro by candlelight and Wright becomes a painter to be reckoned with. 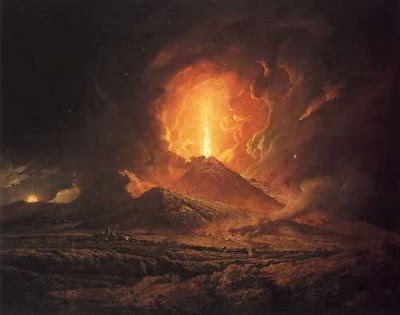 After studying with masters in England, Wright traveled to Italy and witnessed an eruption of Mount Vesuvius in 1774, which he painted multiple times, including An Eruption of Vesuvius Viewed from Portici (above). To use Edmund Burke’s phrase, Wright painted nature both “sublime [i.e., capable of inducing terror] and beautiful,” capturing the Romantic spirit of his age. While in Italy, he may have seen some of the works of Caravaggio and copied the master’s use of chiaroscuro to great effect in the portraits he later painted to support himself and in the scientific images he painted out of his own interest in the sciences, spurred on no doubt by his friendship with great scientific minds of his age such as Erasmus Darwin, James Watt, and Joseph Priestly, all members of the famed Lunar Society. (Anyone interested in learning more about the “Lunaticks,” as they called themselves, should read Jenny Uglow’s entertaining history The Lunar Men: Five Friends Whose Curiosity Changed the World.)

Wright painted nature’s sublimity equally well, as in scenes such as Bridge Through a Cavern, Moonlight (above), from 1791, which parallels many of the Romantic, moonlit scenes of Caspar David Friedrich. Wright painted scenes of Rydal and the Lake District at the same time that the Romantic poets William Wordsworth and Samuel Taylor Coleridge were walking over those fields and composing their masterpieces. Wright stands as a great parallel to the Romantic poets, imbibing much of the same philosophical currents they did and translating them into works of his own medium. The Lunar Men loved to pun on the name “lunatic” for their members, jokingly questioning the sanity of their pursuits. There is no questioning of the sanity and downright majesty of Wright’s portrayal of his age in all its imaginative and intellectual pursuits.