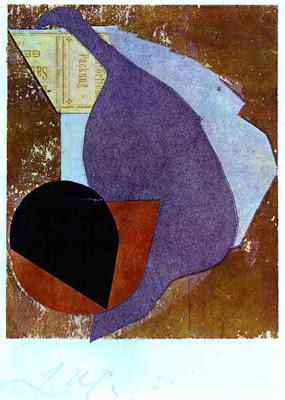 Jean Arp, one of the founders of Dada and early Surrealist, was born September 16, 1887. Painter, collagist, sculptor, and poet, Arp may be best known for his automatism, in which he allowed the rules of chance to create his works, especially his collages in which he would allow pieces of torn paper to fall upon a sheet and he would glue them in place exactly in the pattern in which they fell. Works such as Before My Birth (above), from 1914, show Arp’s dependence on unconscious forces to compose his works.

I’ve always found Arp’s sculpture to be the most interesting aspect of his art. Works such as the beautifully gleaming Classical Sculpture (above) compare favorably with those of fellow abstract sculptor Constantin Brancusi. Henry Moore saw Arp’s works and modeled his own approach to the human figure after Arp’s. Arp gets at the essence of the figure in his sculptures, reducing the figure to its simplest components. In his poetry, Arp showed a similar gift for getting at “the roots” of a subject, as in his poem “The Air Is a Root”:

Arp always seems to stand between two extremes. Born in the Alsace region of France, Arp spoke both French and German and was known as “Hans” by Germans and as “Jean” by the French. Multiple early schools of avant garde modernism claim him as their own. Despite ties to other modernists such as Max Ernst and Kurt Schwitters, Arp always maintained his own unique style. As great as Arp’s greatest works are, they always seem to me to be fragments, as truncated as his limbless Pyrenees Torso (above). Flying by autopilot throughout his artistic career, Arp never seemed to arrive at any destination of achievement. Of course, he would probably respond that it was the journey itself that mattered, the mind in flight more vital than the results on the ground.