The Doors of Perception

Belgian Symbolist painter Fernand Khnopff was born on this date in 1858. Khnopff’s paintings, such as his most famous, The Caress (above), defy explanation. Khnopff remains one of the most unjustly underrated painters of the late 19th century, deserving of a reputation equal at least to that of Odilon Redon, Khnopff's contemporary whose own reputation also idled among a select insiderish few until well into the 20th century. The narrative power of these fantastic scenes, such as the half-leopard/half-woman above caressed by the young man, invites the imagination along, if you dare. 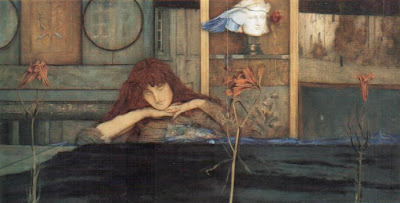 During his training, Khnopff ranked Eugene Delacroix, Jean Auguste Dominique Ingres, and Gustave Moreau as his influences. Moreau seems the most obvious, himself being a Symbolist pioneer. The debts to Delacroix and Ingres stem primarily from their fascination with exotic, quasi-Middle Eastern subject manner. Khnopff’s style itself leans more in the direction of Ingres’ cool Neo-classicism than Delacroix’s heated Romanticism. This Neo-classicist strain also comes from Khnopff’s association with the Pre-Raphaelite Brotherhood during his time in England after 1889. Meeting and befriending William Holman Hunt, Dante Gabriel Rossetti, and Edward Burne-Jones certainly impressed their unique, near-mystical attitudes on Khnopff. Women such as the subject of I Lock My Door Upon Myself (above) from 1891, during the middle of Khnopff’s Pre-Raphaelite initiation, show a similarity to the Arthurian damsels of Burne-Jones' work. The literariness of the title perhaps nods towards Rossetti’s dual career as poet and painter and the overall literariness of the Pre-Raphaelite movement itself.

Khnopff later returned to Europe and exhibited with the new Vienna Secession. Gustav Klimt saw Khnopff’s work and modeled much of his later images after works such as Khnopff’s Sleeping Medusa (above), from 1909. The fantastic femme fatales of Klimt’s work clearly originate from the gallery of ghoulish gals Khnopff created. Klimt’s draftsmanship and creativity, especially in his use of gilding, place him above Khnopff in my estimation, but there’s no denying that Khnopff’s talent deserves greater recognition for the link he provides between the age of Ingres and that of the early Modernists such as Klimt.