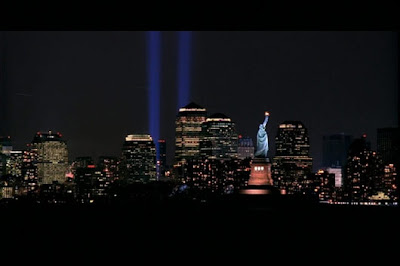 Today marks the sixth anniversary of the day that changed everything for Americans and, consequently, people around the world. Such redefining moments usually provide ample material for artists, but somehow September 11, 2001 and the attacks on the citizens of the United States of America have rendered artists speechless for the most part, even six years later. The current political climate of partisanship and fear-mongering silences even the boldest of voices, but in many ways, has also dropped blinders over our eyes and blocked all our other senses for the most part. Simple, elegant, minimalist works such as the Towers of Light memorial (shown above) speak eloquently yet still unsatisfyingly, saying here was tragedy, yet little more. 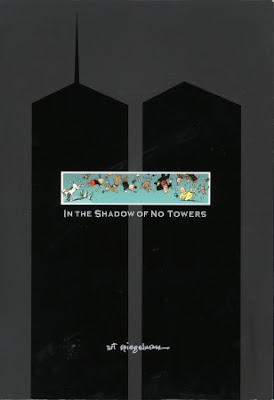 Perhaps the finest attempt to artistically render the confusion and anger of that day and the days afterward is Art Spiegelman’s In the Shadow of No Towers (above) . Perhaps only Spiegelman, who could approach the topic of the Holocaust as a battle of cats and mice in Maus, could also touch this subject, bringing to play his native New Yorker sensibility as well. Spiegelman chose to render the former World Trade Center Twin Towers as simple silhouettes against a grey background, a negation contrasting with the Towers of Light’s attempt to “recreate” in light. Spiegelman produced a cover for The New Yorker magazine right after the attacks that was all black with even blacker silhouettes of the towers, a bold, modernist (yet still minimalist) approach. Spiegelman not only visualizes the tragedy for us, but he also brings some words to the speechlessness of the subject. Sadly, Spiegelman couldn’t get any American publication to run the original strips he eventually collected in the book. German and British publications ran them, but American media felt that it was too soon to think. 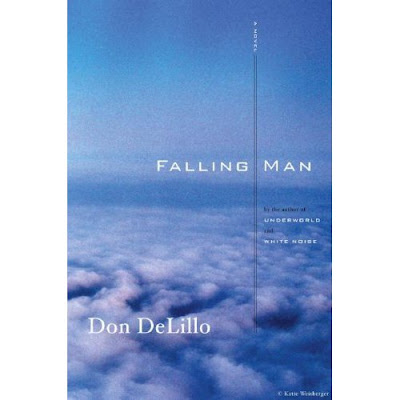 Don Delillo’s novel Falling Man brings more words to the subject, focusing on one survivor’s story and how that story extends and touches so many others. One of DeLillo’s characters is a performance artist who stages apparent suicidal leaps around New York City, perhaps tastelessly mocking those who fell from the towers that day or perhaps reminding us of the human aspect of that day often lost in the images of the mammoth collapses. What struck me initially about DeLillo’s Falling Man was the choice of cover art, which recaptures the innocent blue sky of that day. The perfect weather of that early Fall September day in 2001 made the events even more surreal. I was at work in Philadelphia that day. Annie was in Florida, traveling for work. Her brother could see the smoke from his window across the Hudson River. In the chaos, phones and computers failed to bridge the distances we thought were forever gone. Everything that seemed so close at hand now seemed frighteningly far away. I rushed home with all the other confused commuters. All we had was television and the same footage running over and over. I couldn’t watch anymore and went for a long, long run in the warm air. September 11th still haunts all of us. A recent New York Times article asked if we should just move on, but I’m not sure we’ve ever really spoken about it, regardless of all the noise generated. We still wait for the artist to bring these ghosts to rest.