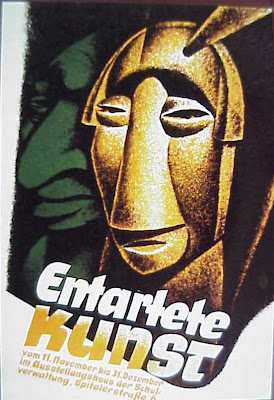 Speaking at the inauguration of the Cologne Cathedral’s new art museum, Cardinal Joachim Meisner, Archbishop of Cologne, warned that art distanced itself from worship, as some modern art does, a culture could become “degenerate,” sparking a conflagration reaching all the way back to the Nazi days of “degenerate art,” the designation Hitler et al placed on all modern art they felt wasn’t Aryan enough or too Jewish (the modern sculptures with exaggerated, "Jewish" features in the poster above were a not-so-subtle hint). Just the phrase “degenerate art” in German (“entartate kunst”) is taboo for it’s close association with the Nazis. Unfortunately, such cultural faux pas seem commonplace during the reign of Pope Benedict XVI, aka Joseph Ratzinger (aka "Joey Ratz" to Jon Stewart). I only wish they were simply a slip of the tongue, though.

Cardinal Meisner earlier protested the appearance of a new window in Cologne Cathedral by German artist Gerhard Richter. Although a New York Times article hailed Richter’s window as another sign of modern European artists returning to the church in terms of subject matter, Meisner criticized the window for not being a figurative representation. Many believe that the real issue bothering Meisner was the closeness of Richter’s abstract blocks of color to many Islamic designs. Sadly, is Islam the new “degenerate” art/race/religion for the Catholic church? After recently reading and reviewing Rowena Loverance’s Christian Art recently and her wonderful message of using art to further religious understanding and spirituality, it’s painful to me to hear any religion closing doors and windows on the power of art and resorting to the same old rhetoric of hate. Painful, but not surprising.
Posted by Bob at 11:20 AM