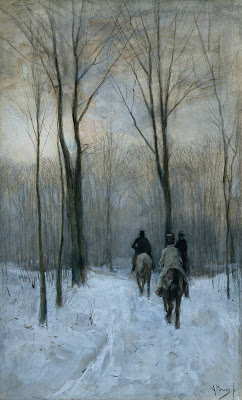 When Vincent Van Gogh wanted to learn painting but lacked the funds to enter a school, he sought out the husband of his cousin, the painter Anton Mauve, born September 13, 1838. Mauve taught Van Gogh the basics of painting and set him off on his short, storied career. Mauve, however, should be remembered for more than just his connection to Van Gogh. In works such as Rider in the Snow (above), from 1879, Mauve shows a beautiful appreciation of natural beauty in his depiction of the snow. Along with Jozef Israels, Mauve promoted a strong realistic movement in Dutch painting that harkened back to the days of Rembrandt. 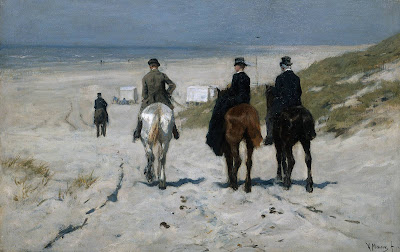 Mauve’s Morning Ride causes a few laughs because of the horse droppings he unceremoniously places in the wake of the horses. Such strident realism separates Mauve’s work from that of the Impressionists who were his contemporaries and from Van Gogh himself, who took realistic scenes and impressed his own unique vision and technique upon them. This earthy quality in Mauve, however, shows how like-minded he and Van Gogh, who had been sketching miners and poor peasants before approaching Mauve, were. Van Gogh reveled in getting his hands dirty, and images such as Morning Ride clearly show that Mauve wasn’t above getting dirty either. 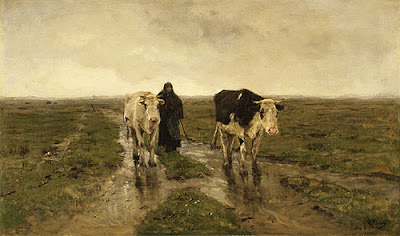 Mauve and Van Gogh both grew up the sons of ministers. From that upbringing, both developed a sense of the sacredness of simple, hard work and the people who do it. Jean-Francoise Millet influenced both artists greatly with his scenes of peasant life depicted honestly and without sentimentality. Mauve’s Changing Pasture (above), painted in the 1880s, examines peasant life with that same clear, compassionate eye. Van Gogh and Mauve unfortunately split apart over time, arguing over the value and direction of Van Gogh’s art. However, the contribution Mauve made not only through his own art but through his furthering of Van Gogh’s development deserve much greater recognition today.