Tragedy, Ecstasy, Doom, and So On 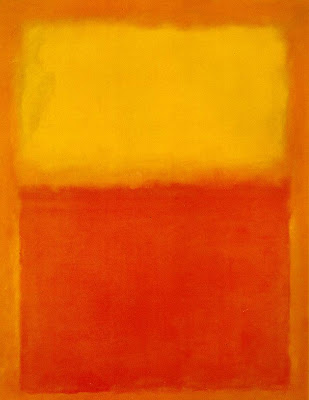 “[I’m] only in expressing basic human emotions—tragedy, ecstasy, doom, and so on,” Mark Rothko once wrote. “And the fact that a lot of people break down and cry when confronted with my pictures shows that I can communicate those basic human emotions . . . The people who weep before my pictures are having the same religious experience I had when I painted them. And if you, as you say, are moved only by their color relationship, then you miss the point.” Born Marcus Rothkowitz on September 25, 1903 in Latvia, Rothko created works such as Untitled (Orange and Yellow) (above, from 1956) that reach directly into your heart, emotionally and aesthetically. Rothko’s multiform pictures, large unframed canvases full of giant bodies of color bleeding into one another, command and envelop a room. Many people see only an emptiness in these blocks of color, or just interesting composition. For those who allow their minds and hearts to ponder the range of feeling within them, Rothko becomes a religious experience. The struggles that play out on Rothko’s multiforms mirror the struggles of his life. After suffering through the Russian pograms of his youth, his family moved to America in 1913. Mastering his new language of English (his fourth), Rothko excelled at school and earned a scholarship to Yale, leaving after one year. Rothko felt drawn to spiritual artists such as Paul Klee, Georges Rouault, and the German Expressionists before meeting fellow philosophical artist Barnett Newman in the 1930s. Through his conversations with Newman and his readings of Freud, Jung, Nietsche, and J.G. Frazer, Rothko developed an idiosyncratic view of myth and symbolism that he expressed in works such as The Omen of the Eagle (above), from 1942. But even those ancient symbols seemed unsatisfying in his mission to express those elusive “basic human emotions.” Simon Schama’s episode on Rothko in The Power of Art series focuses on his 1958 Seagram Murals at the Tate Museum (one of which appears above). In these murals and other late works, such as those which eventually became the Rothko Chapel, Rothko achieved a nearly transcendent use of color and form approximating pure emotion and, perhaps, religious epiphany. Applying the paint to these images became such a demanding experience for Rothko that many of his later works were actually painted by assistants under his direction as his health began to fail. This intensity of his art may have contributed to his suicide in 1970. Schama’s treatment of Rothko presented his works in this cosmic intensity, pulling away from the murals and melding them into a vision of the starry heavens, as if they were doorways to another dimension. The Seagram Murals, with their square frame motifs, open the door to Rothko’s mind and philosophy and call us to join him in a voyage of self-discovery like few other artists can.