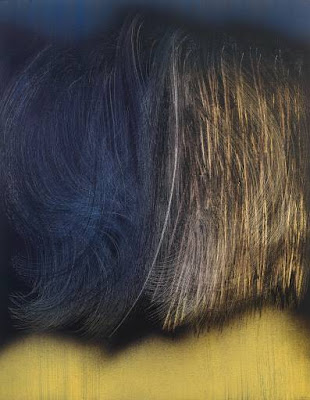 While sharing a home and studio between 1937 and 1942 in France, Hans Hartung and Julio Gonzalez must have celebrated several birthdays together, amused that they shared a common birthday as much as a love of art. Hartung, born on this date in 1904, created some of the most beautiful gestural abstract works of the mid-20th century, such as T1963-R6 (above), from 1963, which displays no bitterness from the harsh treatment he suffered at the hands of the Nazis during the occupation of Paris and the pain of losing a leg while fighting for France in North Africa during World War II. 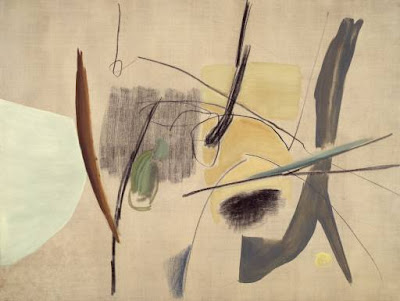 Hartung studied philosophy and art history at the University of Leipzig before turning his full attention to art and moving to Paris in the 1930s. After years of studying German artists such as Lovis Corinth and Emil Nolde, Hartung now studied Cezanne and Van Gogh and learned the secrets of Cubism. During this time, Hartung met Wassily Kandinsky, whose new style of abstraction inspired Hartung to create a style later known as Art Informel (also known as Tachisme), a kindler and gentler form of Abstract Expressionism in which gesture and rhythm become the elements of a piece. T1937-33 (above) shows the influence of Kandinsky on Hartung’s work. Although it looks like a random arrangement of shapes and gestures, Hartung carefully arranged the pieces on the canvas from smaller works of automatic drawings, hoping to capture the energy of those smaller pieces in a larger format. 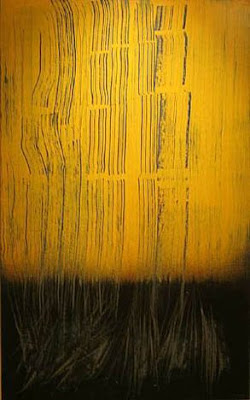 When the Nazis occupied France during World War II, they labeled Hartung’s work as “degenerate art” and even imprisoned him for seven months. Sadistically, his captors placed him in a red-lined cell when they learned he was an artist, thinking the color would damage his eyes. Fortunately, Hartung was released and later fled to fight with the French Foreign Legion in North Africa. As thanks for his heroic service, France granted Hartung citizenship in 1945. In the 1960s, at the height of his reputation, Hartung developed a technique in which he scratched gestures into acrylic paint, such as in T1963-R6 (top of this post) and T1964-H31 (above). In T1964-H31, Hartung scratches into a two-toned surface of pure colors, as if he had taken a work by Mark Rothko and added his signature touches. I like to imagine that such an image represents the rising of a new dawn, a bright sun on the horizon for Hartung and Europe, after the sadness of two long wars.