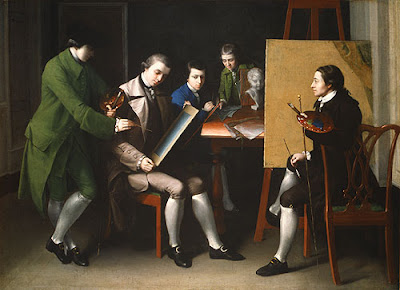 When Matthew Pratt’s cousin Betsy Shewell needed an escort for her trip to London in 1764 to marry the painter Benjamin West, Pratt jumped at the chance and changed the course of his life. Born in Philadelphia, Pennsylvania, on September 23, 1734, Pratt became West’s assistant and then his first student, learning the profession of painting from one of the first accomplished painters associated with America. The American School (above) shows West’s studio in London circa 1765. West stands at the left, offering instruction to a student with a slate. Pratt places himself seated before the easel on the right, already seeing himself as a true professional. After four years with West, Pratt returned to Philadelphia in 1768 and embarked on his career as one of the premier portraitists of pre-Revolutionary America.


Philadelphia bustled with commercial, cultural, and political activity when Pratt returned to ply his trade. “The Athens of America” found itself at the crossroads of the waning days of colonialism and the emerging era of a new, free, democratic republic. Pratt painted royalists and revolutionaries alike. Figures such as William Henry Cavendish Bentinck, 3rd Duke of Portland (above), painted in 1774, with their frilly lace cuffs, represent the royalists still clinging to hope that a separation with England could be avoided. Pratt painted all the famous figures of Philadelphia, including the wife of then-mayor Samuel Powel, Elizabeth Willing Powel. That portrait still hangs in the restored Powel House in Philadelphia, as vibrant as the day it was painted. Pratt learned well from West, using the same smooth surface technique and simple colors of his teacher. 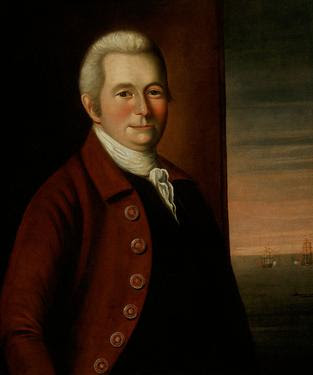 After the revolution began in 1776, Pratt’s fortunes wavered. In portraits such as that of Commodore John Barry (above), painted in the fateful year of 1776, Pratt tries to switch gears and keep up with the times. Unfortunately, the quick switch from high society to heroes of the revolution didn’t suit Pratt’s style. Other portrait artists, such as Gilbert Stuart and John Singleton Copley, whom Pratt met in New York City in 1771, seamlessly adjusted to the new spirit in the air and churned out portraits of the new major society players. Pratt remains an interesting figure in pre-Revolutionary Philadelphia for how he captured and in some ways epitomized a way of life on the way out.