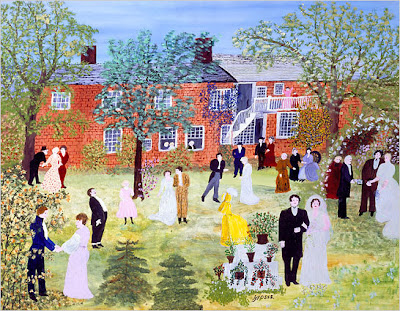 When arthritis set in and she could no longer do needlework embroidery, Anna Mary Robertson Moses decided to take up painting at the amazing age of 76. Over the next 30 years (yes, 30 years) of her life, the artist better known as Grandma Moses painted over 1,500 works in her own unique style. Born September 7, 1860, months before the election that would choose Abraham Lincoln, Moses lived to see the inauguration of John F. Kennedy as president. On her grave was written, “Her primitive paintings captured the spirit and preserved the scene of a vanishing countryside.” In works such as A Country Wedding (above), from 1951, painted when Grandma was 91 years old, Moses preserves the simpler days of courtship and community that remained in the recesses of her memory. 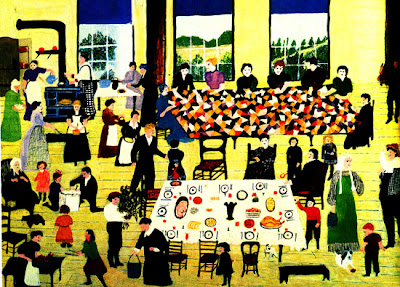 People always accentuate the primitive in Moses’ work. I’ve always seen it more as a direct translation of her quilting and embroidering days onto canvas. Her figures and perspective sometimes seem awkward, but Edward Hicks and other “primitives” never seem to be held back as much as Grandma for these crimes. I think critics underestimate Moses’ compositional skill, especially in works such as The Quilting Bee (above), from 1950. The painting literally buzzes with activity and the rhythm of figures and color almost approaches that of Piet Mondrian if you look at it as an abstraction rather than purely realistic. It’s fascinating to think just how her art would have developed had she begun earlier or had a different educational background. Of course, taking care of a household and farm while giving birth to ten children (five of whom sadly died in childhood) may have kept her a little too busy to paint. Also, much of the strength of Moses’ work comes from this evocation of memories of a lost age. 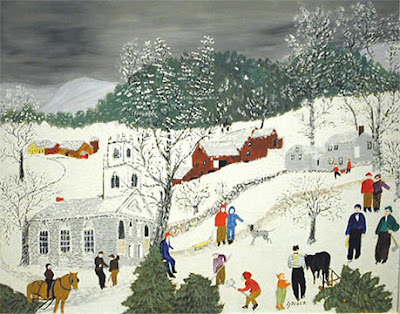 Moses’ work once held a mainstream popularity of the Currier and Ives or Hallmark type. Works such as Let Me Help (above), showing people choosing and chopping down their Christmas trees, evoke a warm and fuzzy mythos Americans love to wrap around their holidays, perhaps as an antidote to the increasing commercialism of them. This mythic aspect embroiled Grandma Moses in the Cold War artistic “arms race” waged between the United States and the Soviet Union in the 1950s. Segments of the U.S. Government in the 1950s wanted to promote the Abstract Expressionists, especially Jackson Pollock, as symbolic of American freedom and individuality versus the forced conformity of Communism. More conservative corners of the power elite, including Presidents Harry Truman and Dwight Eisenhower, touted Grandma Moses as the exemplar of America’s goodness through her images of a golden age of innocence and community. Imagining Grandma and “Jack the Dripper” squaring off in battle may induce giggles, but such dichotomies in contemporary art should always be resolvable in some way. Both Moses and Pollock were expressionists—Pollock expressed the now and the self, whereas Moses expressed the past and the community that was so very present to her.