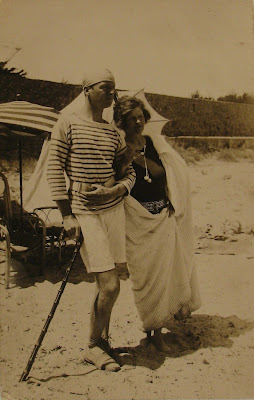 
“I believe in you so,” writes Sara Murphy to her husband Gerald in July 1919, “Our new life is but one thing: your ideals and principles and character organized and put into actuality by me.” Sara and Gerald Murphy, shown above in 1926 at the height of their wealth and style, created a magical life together, their complementary qualities helping to fashion a life that was itself a work of art. Making It New: The Art and Style of Sara and Gerald Murphy, the catalogue to the exhibit currently at the Williams College Museum of Art in Williamstown, MA, shares their life with a new generation and brings back what Calvin Tomkins calls “the freshness and excitement of early modernism in the 1920s.” Perhaps even more importantly, it recovers Gerald Murphy as an important figure in American modernist painting.

Gerald and Sara Murphy, both from wealthy families, married in 1915 and engaged on a life of their own making. Their shared love of art and of the artful life led them to sail for England in 1921 and soon move on to Paris. Ensconced among the artistic elite, Gerald and Sara threw parties that inspired F. Scott Fitzgerald to model Dick and and Nicole Diver of Tender Is the Night after them. Pablo Picasso and his family vacationed on the beaches of Antibes with the Murphys and their children. Picasso once said that the Murphys “embodied the ideal of romantic love.” The photos in the catalogue are simply amazing when you see just who the Murphys were friends with in the 1920s—Ernest Hemmingway to Cole Porter to John Dos Passos to Igor Stravinsky. When Man Ray takes your family portraits, you know you’re hanging out with the cream of the crop.

Deborah Rothschild, editor of the catalogue of essays and author of the central essay, “Masters of the Art of Living,” borrows the title “Making It New” from Ezra Pound’s poetic injunction to “Day by day make it new/ Yet again make it new! that served as a clarion call to the post-World War I generation, including the Murphys, who arrived at just the right moment in Europe to take part in the fun. “The Murphys’ life became an artistic exercise,” Rothschild writes, “informed by discipline, a keen sense of pleasure, and aesthetic complexity… The essays in this volume strive for a balanced portrait of Sara and Gerald Murphy, plumbing the dark side of their lives as well as shedding light on the multiple ways they served as models for the best that life could be.” The life that the Murphys created for themselves “became the calm center of a universe of talented and creative artists” across the whole spectrum of art: painting, literature, music, theater, fashion, design, gardening, home entertaining, and even parenting. 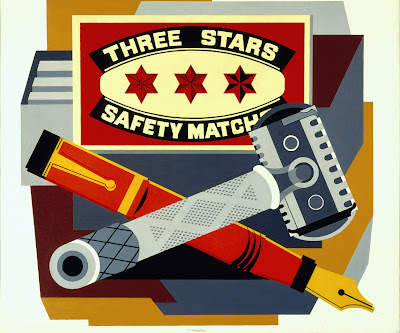 Perhaps the most eye-opening aspect of this exhibit is the quality of Gerald Murphy’s paintings. Arriving in Paris in 1921, Gerald and Sara Murphy saw their first Cubist works and Gerald decided that those were the kind of paintings he wanted to paint. Gerald and Sara soon began studying with Natalia Goncharova, who helped them get work restoring backdrops for Sergei Diaghilev, which led to their meeting other artists such as Georges Braque, Andre Derain, and, most importantly, Picasso. Gerald soon began painting his own unique works, such as Razor (above), from 1924. “Gerald did not mimic the work of other artists, however,” Rothschild stresses. “Rather, he assimilated not only Cubism and Purism, but also Dada and Surrealism, as well as American folk art, advertising, and graphic design, to create works that were entirely original.” Rothschild also finds hints of Gerald’s struggles with his homosexuality in works such as Razor, reading “a coded secret life… laden with private meaning, hinting, beneath their deceptively simple and elegantly pristine surfaces, at Gerald’s persistent feelings of defectiveness and inadequacy.” Razor, for example, pits symbols of safety and masculinity (i.e., the safety razor) versus Gerald’s internal doubts about his own identity as a man. (Kenneth E. Silver, in his essay targeting Gerald’s sexuality, “The Murphy Closet and the Murphy Bed,” sympathetically extends this discussion of Gerald’s sexuality, particularly in the context of Gerald’s interest in fashion.) 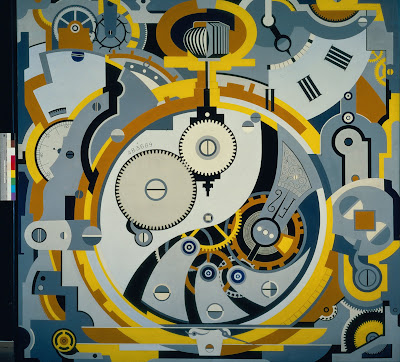 Another amazing work by Gerald, Watch (above), also serves as a veiled self portrait. Gerald reproduced the inner workings of the watch with meticulous precision, except for a few minor details that he changed that would keep it from functioning. “Although it is possible that Gerald made these alterations for aesthetic reasons,” Rothschild muses, “there is a case to be made that this painting is a secret self-portrait of a defective, nonfunctioning self.” Such tantalizing details seem even more enticing knowing that of the 14 paintings Gerald painted, only seven survive today, with only a few more surviving in photographs. When his son Patrick’s tuberculosis worsened and they sought treatment in late 1929, Gerald gave up painting entirely. “Gerald wasn’t Irish for nothing,” poet and friend of the Murphys, Archibald MacLeish later said. “He bore the stigmata… he took the illness as a judgment on himself. He hadn’t earned the right to art.” Again, Gerald’s sense of inadequacy, originating in his relationship with his father as well as his conflicted sexuality, blocked his path. Gerald’s work remained forgotten for the most part until a 1962 exhibit, followed by several short studies of his work. “I’ve been discovered,” Gerald quipped before his death in 1964. “What does one wear?” 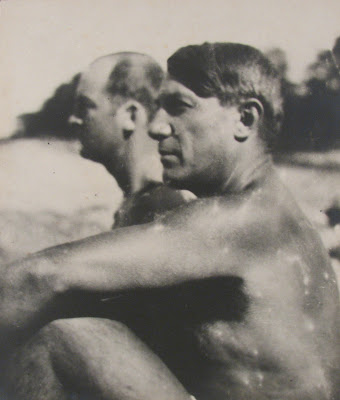 Sadly, the Murphys’ son Patrick died in 1937, two years after their other son, Baoth, died suddenly of meningitis in 1935. The shock of these deaths shook the Murphys’ marriage to the core, as Gerald began to express his homosexuality more freely after the years of struggle. The two of them remained together to the end of their lives. Calvin Tomkins, a neighbor, profiled them in a New Yorker piece in 1962, which he later expanded into the book Living Well Is the Best Revenge. Personal fame came late for the Murphys, but their legacy of inspiring and supporting the arts never died. Acting as satellites around the main essay by Rothschild, smaller studies on specific aspects of the Murphys’ impact on the arts. Most importantly, however, was how the Murphys served as a friend to all artists (such as in the photo of Picasso with Gerald above). Picasso sketched both Gerald and Sara (always with her trademark pearls) and used their aura, if not their actual images, in later works. The Murphys supported Hemmingway in the 1920s (cruelly getting in return a negative portrayal in his posthumous A Moveable Feast and perhaps a negative portrayal as Pablo and Pilar in For Whom the Bell Tolls) and Fitzgerald in the 1930s, even after their own wealth had decreased after the stock market crash.

I imagine that it was difficult for the Murphys’ descendants to allow Gerald and Sara to undergo such examination, warts and all, but Making It New gently and affectionately reappraises these two remarkable people for today, free of the prejudices of their time. Gerald, especially, now stands as the landmark painter he was, for however brief a time. The Murphys were truly children of a paradise of their own making, if only for a brief time before tragedy befell them, and Making It New brings those days in the modernist Eden back in all their color and vibrancy.

[Many thanks to Williams College Museum of Art in Williamstown, MA for providing me with a review copy of Making It New: The Art and Style of Sara and Gerald Murphy and the images from the exhibit.]