His Day in the Sun 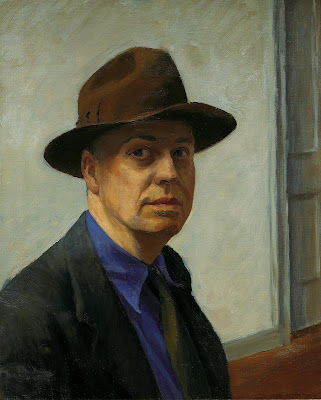 “All I wanted to do was to paint sunlight on the side of a house,” Edward Hopper once said, adding to the mountain of lore behind his persona as a simple man painting simple paintings. The new exhibit at the National Gallery of Art in Washington, DC, and the companion exhibition catalogue make great strides in revealing the man behind the mythology—the lifelong Francophile and student of European art who, thanks to critics and his subject matter, became the embodiment of what a “modern” American painter should be. The straightforward portrait of Hopper, such as that of the Self-Portrait of 1925-1930 (above), is analyzed like never before. 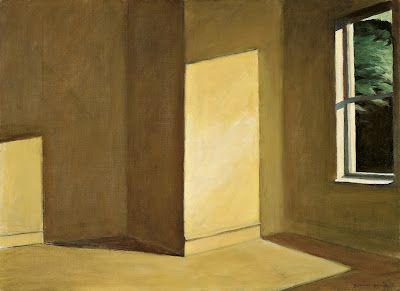 Carol Troyen, co-curator of the exhibit from the MFA in Boston, tackles the difficult task of unraveling the history of the popular image of Hopper in the opening essay of the catalogue, “’A Stranger Worth Talking to’: Profiles and Portraits of Edward Hopper.” Troyen sees Hopper’s self-portraits mapping out the course of his career and the development of his public persona, with the early portraits revealing his study under Robert Henri and association with members of the Ashcan School. By the 1920s, after years of struggle, Hopper’s success allows him to portray himself as “independent” from Henri, as in the 1925-1930 Self-Portrait above. “In his stylish, casual attire,” Troyen writes, “Hopper presents himself as a man of the world taking its measure, yet because success was so long in coming, he seems not entirely trustful of that success.” Troyen traces how critics shaped the perception of Hopper’s art and life into the “quintessentially American artist, a realist whose style was associated with truth telling and admirable independence.” But, Troyen cautions, “[w]hereas this image did not contradict the facts of his life and art, it did not acknowledge all of them.” Hopper’s ascension in the 1920s and 1930s synchronizes with the rehabilitation of Thomas Eakins’ reputation, with Hopper picking up the torch of realism and “true” American painting from Eakins. Sadly, this American-ness covers over the elements of “fin-de-siecle elusiveness” and complexity behind Hopper’s work. Critics in the 1950s and 1960s suddenly discover the emotion and isolation of Hopper’s work, mirroring the anxieties of those ages, but the well-built earlier critical portrayal sticks. Troyen sees Hopper’s late work, Sun in an Empty Room (above), painted just 4 years before his death, as a “valedictory” abstract self-portrait of a celebrity painter who was never truly known by his public. 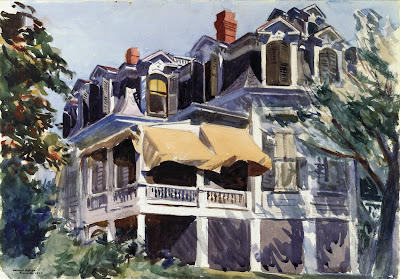 Pulling a different thread from the blanket of the past covering over the lost Hopper, Elliot Bostwick Davis analyzes the importance of Hopper’s etchings and watercolors to his development, showing how these media allowed him to experiment freely and establish “a repertoire of themes he would continue to refine throughout his later years.” In addition to Henri, William Merritt Chase and Kenneth Hayes Miller emerge as influential teachers for Hopper. Davis reveals Charles Meryon, a 19th century French etcher, as a stunningly powerful influence on Hopper’s work in terms of his architectural subject matter and arresting elevated perspectives. Carol Troyen’s essay on Hopper’s work at his first summer home of Gloucester, Massachusetts links up nicely with Davis’ essay by showing how watercolors such as The Mansard Roof (above), from 1923 gave Hopper’s career “a fresh start.” The Brooklyn Museum exhibited The Mansard Roof in 1923 and later bought the painting (his first sale in 10 years), thus “prompt[ing] the first serious critical response to Hopper as a painter.” Jamet L. Comey examines Hopper’s similar work on the coast of Maine, where he continued “to find his own voice” and develop a mature style, especially in his paintings of lighthouses, which Hopper’s focus gave “an iconic presence.” Instead of painting lighthouses “in a picturesque manner or in a treatment that emphasized its function,” Comey shows, Hopper “chose to paint a more modernist image full of light and geometric shapes” that would eventually become his signature style. 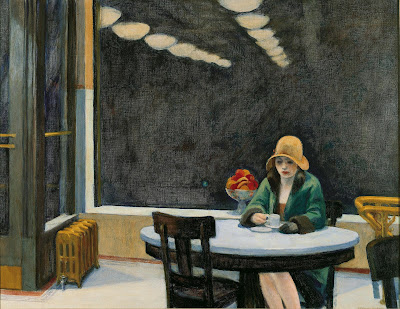 Troyen moves the discussion of Hopper back to the city in her essay, “’The Sacredness of Everyday Fact’: Hopper’s Pictures of the City.” Living in New York, surrounded by the excess of the Jazz Age, Hopper chose, in Troyen’s view, rather to depict “those who were uncomfortable with the city’s raucous excitement, those who believed, as did journalist Walter Lippmann in 1925, ‘that the clamor of life in the city should not be acknowledged as an American ideal.’” The paintings of this period, such as 1927’s Automat (above), show an increased narrative interest in Hopper’s work, a remnant perhaps of his etching days. Hopper presents a story “without an indication of a motive or resolution” that “elicit[s] both curiosity and sympathy but… satisf[ies] neither.” Such works exemplify Hopper’s “small town” American credentials earned through his “pursuit of the outmoded, the unexceptional, the stark and seemingly unpaintable” and thus “record[ing] what for some defined the true American scene before the cacophony of the Jazz Age had drowned out its meaning.” As with all her essays in the catalogue, Troyen beautifully merges social history with critical analysis of Hopper’s paintings, refusing to reduce the works to merely cultural artifacts yet still showing how Hopper willingly engaged the issues of his time in his art while still addressing his own aesthetic needs. 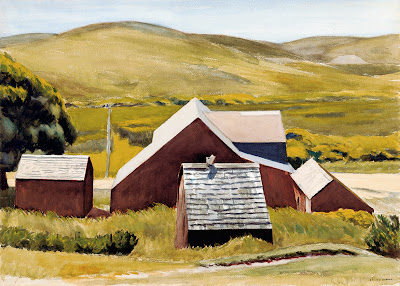 Hopper’s personal aesthetic needs stand at the center of Ellen E. Roberts’ essay, “Painting the Modern Cape: Hopper in Truro.” Between 1930 and 1967, when Hopper died, he summered in Truro, Massachusetts nearly every year. On Cape Cod, Hopper saw “a balance of the old and the new—the continual accretion of new kinds of human elements on the timeless natural landscape.” “Although he drew attention to the difference between human and natural elements in his paintings,” Roberts writes, “Hopper presented them in harmony with one another.” In works such as Roofs of the Cobb Barn (above), from 1931, Roberts sees Hopper emulating Paul Cezanne by “transform[ing] the structures into simplified blocks in order to investigate the formal relationship between them” and harmonize his environment. Hopper taps into Truro’s “potential for modernist exploration” to understand the contemporary American experience as it moved away from the rural past to an urban future and sought new ways of seeing the world. Courageously, Troyen concludes her contribution to the catalogue by tacking perhaps the touchiest of Hopper subjects—women. She concisely defines the Hopper female “type”: “a woman whose taut body is dressed in form-fitting clothes, whose sculpted features make her seem a little hardened, and who arouses erotic expectations that are seldom met.” Working from those generalizations, Troyen perceptively analyzes several specific Hopper women, such as the usherette in New York Movie (above) from 1939. Hopper’s choice of a movie usherette makes even more obvious the female role as “an escort into the realm of fantasy,” here “a mediator between the audience and the mythical actors on screen.” Despite her more public function, the usherette stands aside as the movie runs, becoming “another of Hopper’s women in interiors, absorbed in her own daydreams.” Troyen’s delicate touch in handling Hopper’s women make this the finest essay of the collection. 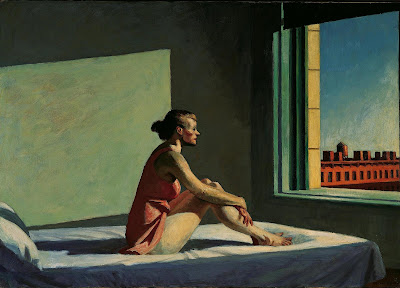 Judith A. Barter, co-curator of the exhibit from the Art Institute of Chicago, concludes the catalogue with essays on Hopper’s famous Nighthawks and his late pictures. Barter takes Nighthawks and breathes new life into the old warhorse by showing how Hopper took such diverse elements as French Impressionism, Post-Impressionism, Surrealism, the essays of Ralph Waldo Emerson, film noir, and pulp fiction and created his most iconic painting. Barter’s connection of the people-watching works of Manet and Degas, Van Gogh’s Night Café, and de Chirico’s desolate streets all with Nighthawks reclaims the true internationalism of Hopper without denying his American identity. Her second essay, “Travels and Travails: Hopper’s Late Pictures,” turns the tables and shows how Hopper’s late pictures, such as Morning Sun (above), with their sense of “the apprehension that transience and impermanence produced” in 1950s America generally (and the aging Hopper personally), influenced artists such as Andy Warhol, Ed Ruscha, Richard Diebenkorn, and David Hockney. “What Hopper and Pop Art shared was an aesthetic fascination with and formal exploration of the mundane, urban, and commercial everyday world,” Barter writes. “Where others would have seen the banality of modern American culture,” Barter adds, “Hopper created genuine beauty,” thus influencing future artists with hope rather than hopelessness.

This exhibit and catalogue bring Edward Hopper down from the Mount Rushmore of American art and make him human again, susceptible and open to influences domestic and foreign rather than the improbably self-contained genius sprung fully formed from American soil. In combination with the beautiful assembly of paintings now at the National Gallery of Art in Washington, DC, this exhibition catalogue allows us to see Hopper more fully and more clearly than ever before, and certainly better than possible during his lifetime amidst the glare of the celebrity sun. A new sun rises on Edward Hopper in this achievement, allowing him to cast a shadow far more nuanced, wider, and longer than ever before.

[Many thanks to the National Gallery of Art in Washington, DC, for providing me with a review copy of the catalogue to the exhibit Edward Hopper and the images above from the exhibit.]