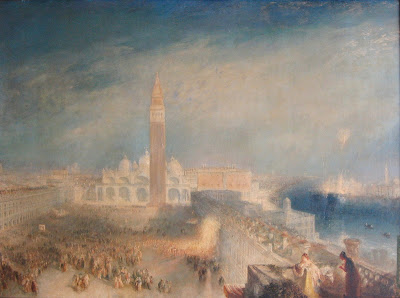 As part of the run-up to the October opening of the J.M.W. Turner exhibit at the National Gallery of Art in Washington, DC, the NGA features a fantastic podcast titled, “A Shakespearean Connection,” that brings together Michael Kahn, Artistic Director, Shakespeare Theatre Company in Washington, DC, and NGA Senior Curator Franklin Kelly to discuss links between Turner and William Shakespeare. The grand opening of the Shakespeare Theatre Company’s new Harman Center for the Arts also in October makes this a double celebration of England in America. In the 14-minute discussion, Kahn and Kelly discuss how Turner consciously drew parallels between himself and Shakespeare, going so far as to adopt Shakespeare’s birthday of April 23rd as his own. Turner attempts to place himself on equal footing with the Bard, earning in later life the unofficial title of “the Shakespeare of Landscape.” In Juliet and her Nurse (above), Turner alludes to Shakespeare’s Romeo and Juliet yet moves the scene from Verona to Venice, a liberty that drew the by-then standard Turner-esque critiques of “too fantastic” and “unreal.” These criticisms roused the young John Ruskin to write a letter to Turner offering to act in his defense, an offer Turner kindly refused. However, that act began a life-long championing of Turner by Ruskin that raised not only Turner but also Ruskin within the ranks of art history. 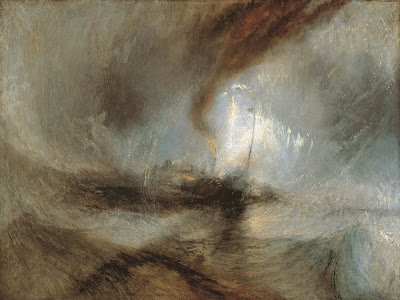 Joseph Mallord William Turner (1775-1851), Snow Storm - Steam Boat off a Harbor's Mouth Making Signals in Shallow Water, and Going by the Lead. The Author Was in this Storm on the Night the Ariel Left Harwich, 1842, oil on canvas; Tate, London, Bequeathed by the Artist, 1856

Kahn and Kelly later remark on Turner’s Snow Storm (above), in which Turner claims that he was aboard a steamboat named the Ariel in the middle of a snowstorm (a claim that has never been verified and is widely disbelieved). Kahn marvels at the painting as a “visual transcription of Ariel’s description of the storm” at the beginning of Shakespeare’s The Tempest. “So theatrical, so evocative,” Kahn gushes. This later, nearly abstract painting contrasts beautifully with the more realistic, controlled Juliet and her Nurse. In this brief discussion, Kahn and Kelly neatly cut to the core of Turner’s Shakespearean qualities of breadth and depth. It’s a tasty appetizer for anyone planning on seeing the full-course Turner exhibit later this year at the NGA or next year at the Metropolitan Museum of Art in New York.

[Many thanks to the NGA for the images from the Turner exhibit above.]
Posted by Bob at 6:18 AM