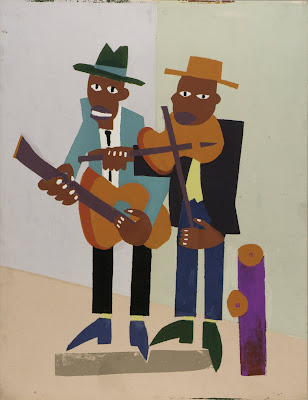 William H. Johnson “was a fascinating synthesis—African-American-born, European-American-trained; primitive/traditional in lineage, yet a product of the post-impressionist art schism,” writes Richard J. Powell in his masterful Homecoming: The Art and Life of William H. Johnson . William H. Johnson’s World on Paper exhibit appears at the PMA through August 12th. Street Musicians, one of Johnson’s scenes of Harlem life from the PMA exhibit, appears above.

Johnson ranks among the great African-American artists of the 20th century, next to Jacob Lawrence, Horace Pippin, and Romare Bearden, but his reputation among the general public has lagged behind for several reasons. Johnson spent much of his career in Europe, studying European modernism and enjoying the better racial climate for himself and his Danish wife. The chameleon-like nature of Johnson’s artistic development also makes labeling his art with a useful school difficult. Finally, Johnson’s mental and physical illnesses robbed him of the last 25 years of his life, burying his artistic reputation before his actual body. Adding all these together with the normal difficulties of African-American artists to make inroads into mainstream culture, it is amazing that we know of Johnson’s work at all.

Born among the poor, rural African-American population of Florence, South Carolina, Johnson developed an early talent as an artist and moved to Harlem, New York in 1918 with dreams of becoming a cartoonist. He quickly became a successful art student and nearly won a scholarship to study in Paris, which went to another student amidst rumors of racism. Johnson’s teacher, Charles W. Hawthorne helped raise the money for Johnson to travel and study in Paris, where he arrived in 1926.

Working in the former studio of Whistler, Johnson quickly came under the influence of Chaim Soutine, producing landscapes and self-portraits with the same distinctive, expressionist distortions and wild coloration. He met Holcha Krake, a Danish weaver interested in folk art, in 1928 and they married in 1930. Krake, 16 years Johnson’s senior, helped foster Johnson’s appreciation of folk art, particularly the folk art of his rural beginnings. 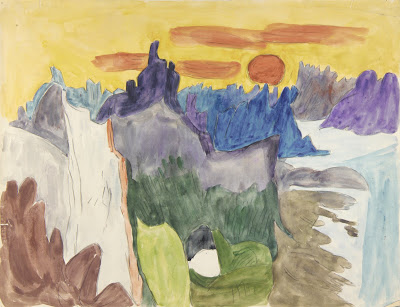 Johnson soaked in all the modernist influences of Europe: from Van Gogh and the Post-Impressionists to Oskar Kokoschka and the German Expressionists. Powell views Johnson’s “escape” to Scandinavia as similar to Gauguin’s escape to Tahiti. His travels in Denmark and Norway exposed him to the light of that region and its unique landscape (Lofoten, Norway—Midnight Sun, from the PMA exhibit, appears above). While in Norway, Johnson met Edvard Munch and saw some of Munch’s woodblock prints, which had a profound influence on Johnson’s use of woodblock prints (as can be seen below in the woodblock of Johnson and his wife, Willie and Holcha, from the PMA exhibit). 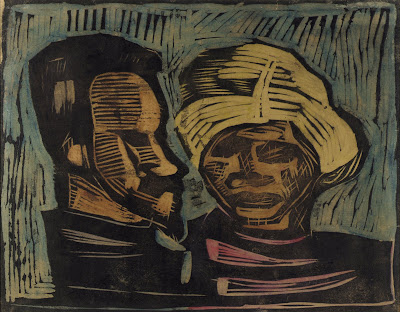 Johnson and his wife fled Europe on the brink of World War II and returned to New York City in 1938. His return leads to a shift from predominantly painting landscapes to mostly figurative art. Krake’s folk interests lead him to embrace his own African-American folk culture and paint rural images of African-American life in the South, including several paintings of African-American soldiers training to fight in the war. 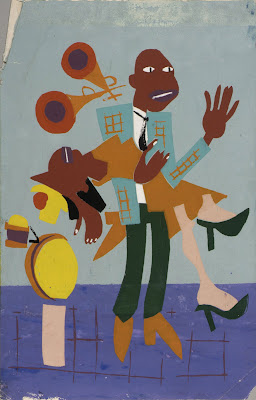 Powell praises Johnson’s Jitterbug series [Jitterbug (V) from the PMA exhibit appears above] particularly as an instance of moving “living Cubism” in contrast to the static analytical cubism of Picasso and Braque. The war years marked the apex of Johnson’s creative output, as the heated cultural and political landscape inspired him to take on more historical and political subjects. Moon Over Harlem depicts the aftermath of a 1943 Harlem race riot begun when a police officer shot an African-American soldier in the arm. Powell sees Johnson as tapping into the same tensions that led to the riot: “urban poverty, racial oppression, and economic exploitation.”

Sadly, when Johnson’s wife Holcha dies in 1943, he suffers a complete mental breakdown. He turns to religious subjects for his artwork in his grief, painting scenes inspired by African-American spirituals such as Swing Low, Sweet Chariot and Climbing Jacob’s Ladder. In these scenes, Powell sees not only grief but also “a keen understanding of the black church, as well as a reverence for traditional African-American religious values and expression.” Johnson soon returned to South Carolina and again painted the people and scenes of his youth. From that setting, he soon began to paint historical subjects: first, “Fighters for Freedom” involved in the struggle for racial equality (Nat Turner, Frederick Douglass, Abraham Lincoln, etc.) and, then, international freedom fighters (Winston Churchill, Gandhi, FDR, etc.).

Johnson’s style grew increasingly primitive, in what he saw as “a development” of his “one absorbing and inspiring idea… to give the story of the Negro as he existed.” After World War II, Johnson returned to Denmark to live with his wife’s family, but soon grew increasingly erratic and was eventually diagnosed with advanced syphilis, which had robbed him of some of his motor control over the years and perhaps contributed to the simplification of his style. Johnson returned to the United States in 1947 and was placed in a mental health facility, where he remained until his death in 1970. When a retrospective of his art was mounted in 1971, neither Johnson’s family nor the curators knew that he had died the previous year.

William H. Johnson ranks among the unjustly erased figures of art history. As Elizabeth Broun asks in her introduction to this book, “Will Johnson remain within the ghetto of the ‘Negro artist’ or emerge as a painter of range and power who recast his personal experience as a profoundly moving national history?” Powell’s book and the PMA’s exhibit answer that question both positively and powerfully.

[Many thanks to the Philadelphia Museum of Art for providing me with a review copy of Homecoming and the images from the William H. Johnson’s World on Paper exhibit.]
Posted by Bob at 6:21 AM