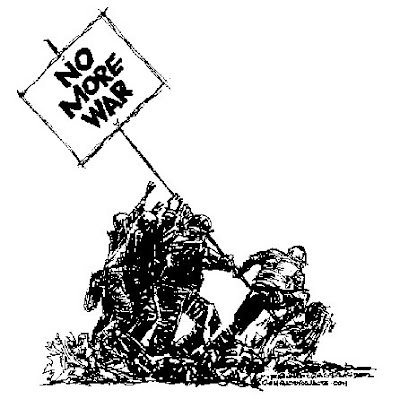 A quick barometer of the political climate for most Americans is the newspaper political cartoon. For almost 60 years, Paul Conrad, born on this date in 1923, has taken the temperature of his country and diagnosed its ills. No More War, Conrad’s re-imagining of the iconic Iwo Jima photograph as pacifist statement, appears above. 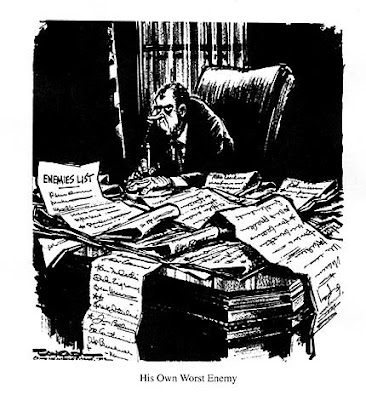 Conrad worked at the Denver Post from 1950 through 1964, but it was his work at the Los Angeles Times from 1964 through 1993, during which he won three Pulitizer Prizes, that has made him the most significant political editorial cartoonist since Herblock. Richard Nixon felt the sting of Conrad’s cartoons strongly enough to include Conrad on his infamous “enemies list,” a distinction Conrad wore as a badge of honor, even when he served in 1977-1978 as the “Richard M. Nixon Chair” at Whittier College, Nixon’s alma mater. Nixon compiles his list of unfriendlies in Conrad’s cartoon above, subtitled "His Own Worst Enemy.” 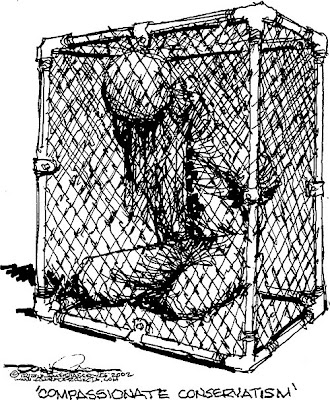 Although he no longer works for the Los Angeles Times, Conrad continues to comment on the politics of America as part of the Tribune Media Syndicate. Now 84, Conrad still sees with the eyes of a brash, young radical and ferrets out hypocrisy wherever he finds it, as in his drawing of a bound and caged Guantanamo Bay prisoner subtitled “Compassionate Conservatism.” In a tradition reaching back to the days of William Hogarth, Paul Conrad uses art and humor to reveal the injustices and inconsistencies of his age, all with a fierce sense of patriotism and love for his country.
Posted by Bob at 6:01 AM