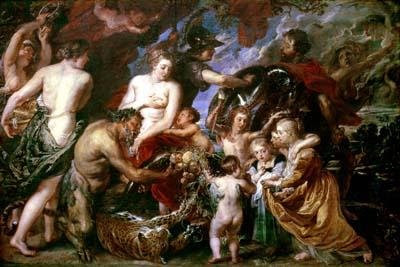 When sent to England to help negotiate a peace treaty between Spain and Britain in 1629, Peter Paul Rubens painted Minerva Protects Pax from Mars (Allegory of Peace and War) (above) and presented it as a gift to King Charles I of England, hoping that the allegory wouldn’t be lost on him. Both diplomat and artistic genius, Rubens continues to bring peace to countless relationships today through every full-figured woman’s favorite adjective, “Rubenesque.” 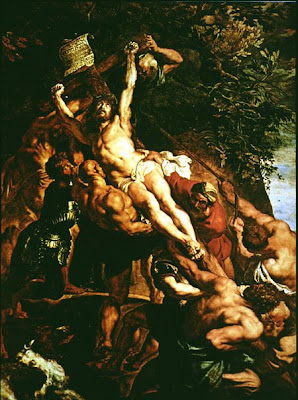 Rubens holds the distinction of receiving knighthoods from both King Charles I of England and King Philip IV of Spain for his diplomacy. The charm and elegance found in Rubens paintings must mirror some of his own personal attributes. Friend of Jan Brueghel the Elder and Diego Velazquez and teacher of Anthony van Dyck, Rubens’ personality endeared him to many and amplified his influence within the art world then and since. Rubens’ Raising of the Cross (above) demonstrates the many Michelangelo-esque touches he brought to the Baroque style of religious art. The Renaissance certainly influenced Rubens’ painting, but his heightened drama and swirling action upped the ante of his 16th century predecessors. 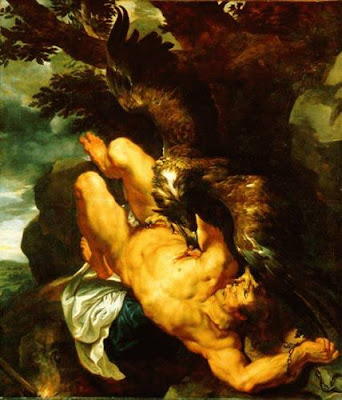 One of the most iconic works at the PMA is Rubens’ Prometheus Bound (above). The Jacques Lipchitz Cubist sculpture of Prometheus Strangling the Vulture outside the PMA provides an amusing counterpoint to this classic work inside, with the bravura male torso straight out of classical sculpture coming to life in the futile struggle with the vulture. Rubens’ Prometheus Bound was one of the first paintings I remember seeing as a youngster and thinking of as truly great art, owing perhaps to the monumental size of the canvas and the easily understood narrative. Since those days, I’ve only grown to love it more and more.
Posted by Bob at 5:49 AM