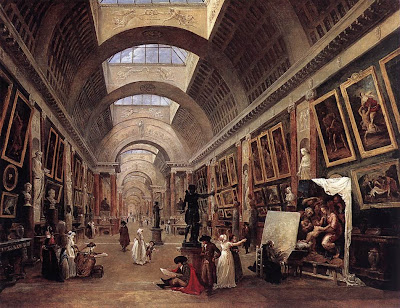 I recently finished reading Andrew McClellan’s Inventing the Louvre: Art, Politics, and the Origins of the Modern Museum in Eighteenth-Century Paris and came away with an education in the history of early museums and the hidden agendas behind the early Louvre (and all museum practice since). (Hubert Robert’s Design for the Grand Galerie of the Louvre from 1796 appears above.) (Many thanks to David Packwood at Art History Today for sharing with me the handbook to his class “Art and Audience—From the Louvre to the Tate,” part of which involves McClellan’s book.)

McClellan traces the evolution of what we now know as the Louvre from the king’s gallery to the people’s gallery of the French Revolution. Each interested party used the collection and how that collection was arranged to project a specific agenda into the minds of the viewer. When the collection was in the hands of the king, who valued loyalty and tradition, the collection was arranged on a thematic basis, especially in the Throne Room, where French history painting was given a privileged place, exalting the past and connections to the power of the past over all other genres of painting. After the fall of the royals and the rise of the people in the French Revolution, a more historical, evolutionary arrangement of the collection was developed. By showing a clear movement from the past art of the royals to the more enlightened, revolutionary art of the people’s republic, the intended message was of a clear path of progress to better days.

With the help of Jacques-Louis David and other artists, the Louvre became a place of “public instruction,” with, to quote McClellan, “the purpose” of “effect[ing] the complete regeneration of society along Republican lines.” As Napoleon Bonaparte came to power and led France to military glory, he recognized the “value” of art “in the realm of politics and war,” incorporating the surrender of artworks from vanquished countries and the shipment of that booty to the Louvre, which then became a testament to the new status of France as the military and cultural superior of all the world. France justified this theft by claiming that only they could protect and conserve the great art of the world. Even today, half of the works seized in the Napoleonic Wars by France still remain in the Louvre, thanks to a myriad of reasons.

McClellan masterfully uses a New Historicist technique similar to that emplyed by French philosopher Michel Foucault and its finest American practitioner, Stephen Greenblatt. New Historicists can take any “text”—a novel, a painting, a cultural icon—and examine it by deconstructing the façade of “lofty” motivations to get down to the more mundane motivations of politics, greed, and lust for power. For me, the fascinating aspect of McClellan’s approach was it’s ability to serve as a primer for anyone wanting to deconstruct their favorite museums. 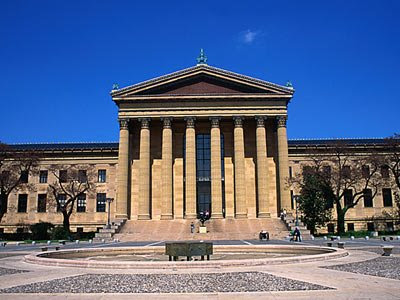 For example, the two museums I’m most familiar with, the PMA (above) and the PAFA (below) serve very different functions. The PMA mimics the temples of ancient Greece, placing art on a cultural pedestal at the top of the “Rocky” steps and at the end of the Benjamin Franklin Parkway, which itself cuts a vertical “red carpet” through the grid structure of William Penn’s Philadelphia. Everything points to the PMA as the presence of a historical and cultural “other.” When the PMA’s early conceptions grew out of the centennial celebrations of 1876, America still struggled to form its own cultural heritage to compete with that of Europe. The PMA attempts to co-opt that heritage and replant it in the heart of an American city. 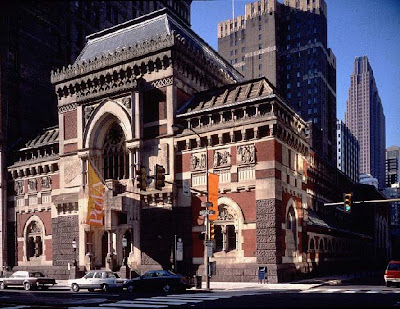 The PAFA, on the other hand, takes that same struggle for an American culture and goes in the opposite direction, fostering a new, distinctly American culture rather than one borrowed from European models. The lavish appearance of the Frank Furness’ building strives to be anything but ancient or European. Although the PAFA often followed European models in their teaching curriculum, their building itself cries “America.”

I can’t wait for the new Barnes Foundation building on the Parkway to see, enjoy, and deconstruct as well. Dr. Barnes, ironically enough, used a thematic, non-historical organization of his collection, similar to the royalist approach, but, oddly enough, his agenda was to link primitive and folk cultures with the latest movements of European modern art, in an attempt at egalitarianism rather than the gentle enforcement of an elitist social hierarchy. McClellan’s approach, like all New Historicist deconstruction, can be very addictive once you know how to play the game.
Posted by Bob at 6:01 AM