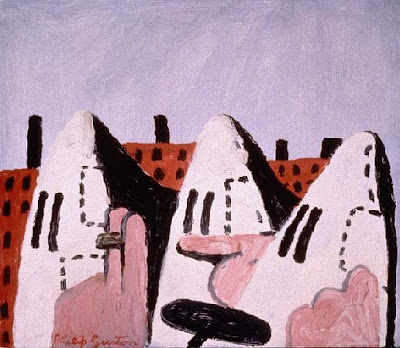 Once a member of the New York School of Abstract Expressionists, Philip Guston later developed a more post-modern style that used cartoonish figures to comment on American society. The Three (above) from 1970 shows a trio of hooded Klansmen, taking the very real issues of racism and hate crimes and putting the clown nose of absurdity on them. 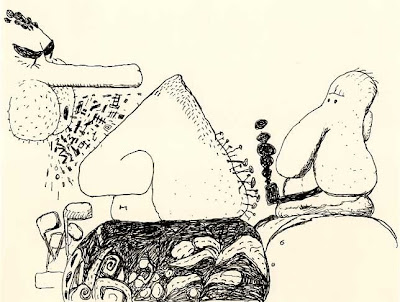 Guston met Jackson Pollock in high school and their career paths paralleled for a while. Like Pollock, Guston painted in a more representational style before the 1950s, although his work showed more Renaissance influences than that of Pollock, who had discovered Jung by that point. Guston painted in the same Abstract Expressionist style as Pollock and De Kooning up until the 1960s, until he found abstraction to be unsatisfying. What Guston ultimately found satisfying was taking the drama of Richard M. Nixon’s presidency and revealing it for the absurdity is was in his Poor Richard series. Nixon, Nixon’s Vice President Spiro Agnew, and the then Attorney General John N. Mitchell receive the Guston treatment in one of the Poor Richard drawings above. 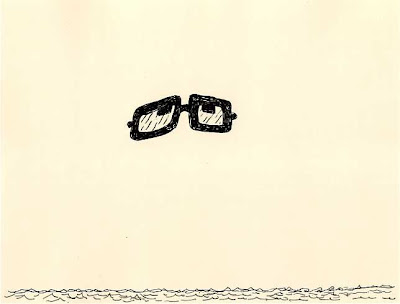 You can see the influence of Alfred Jarry’s Ubu character in Guston’s depictions of Nixon and his henchment. Clearly, Guston uses the figure of Ubu to point out the beastly and power-drunk aspects of the Nixon administration as well as its absurd descent into paranoia. Another technique Guston used to render the powerful powerless before art was the diminishing of a figure to a single characteristic, as seen in the drawing above where Nixon’s Secretary of State (and advisor to the current Bush Administration), Henry Kissinger, perhaps the most perfidious of Nixon’s sidemen, becomes a hapless pair of eyeglasses. Gary Trudeau in his Doonesbury strip uses this same technique to represent all politicians, such as his current usage of a battered Roman war helmet over an asterisk to represent George W. Bush. In retrospect, Philip Guston’s post-abstract, post-modern work seems the perfect style for the bizarre age of Nixon and perhaps for our own age as well.
Posted by Bob at 6:09 AM