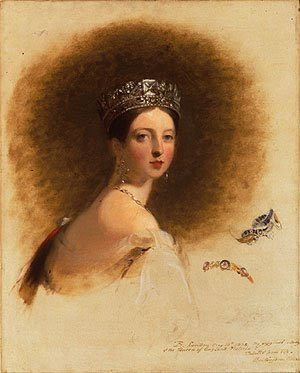 Thomas Sully, American painter born in England on this date in 1783, was one of the most celebrated portraitists of his age on both sides of the Atlantic. His portrait of the young, pre-“We are not amused,” Queen Victoria, circa 1838, appears above. 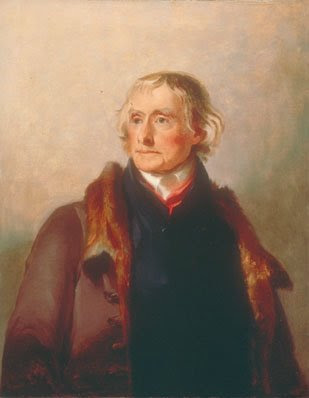 Sully studied in America under Gilbert Stuart and later went back to England to study with Benjamin West. During his travels, Sully was able to paint portraits of most of the major political and cultural figures of the day. His portrait of an aging Thomas Jefferson appears above. Sully painted portraits of other revolutionary war figures, such as George Washington and John Adams, as well. 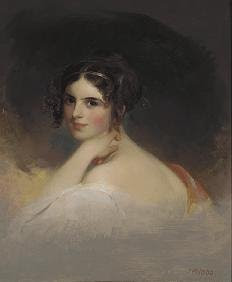 I’ve seen Sully’s portrait of the famous early 19th century actress Fanny Kemble (titled Frances Anne Kemble as Beatrice, above) at the PAFA many times. Sully specializes in a wonderful dreamy look that works well in depicting women and children romantically, but not so well for historic figures such as Jefferson or Washington. I’m sure young Queen Victoria appreciated the gentle touch, but as much as I see a kindness in the face of Sully’s Jefferson that I believe was there in real life, Jefferson seems to dissipate into thin air in his painting rather than stand as firm as his convictions, something I’ve always sensed in the American Revolutionary portraits of Charles Willson Peale and Stuart. 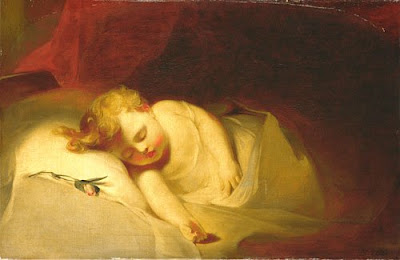 Child Asleep (The Rosebud) (above) from 1841 epitomizes Sully’s approach for me. It’s a lovely scene that tugs at anyone’s heartstrings, whether they’re a parent or not, but it lacks definition and form beneath the light romantic touch. Sully often draws comparisons to Sir Thomas Lawrence, whose work influenced Sully’s studies in England, but Lawrence’s work has a substance I don’t see in Sully’s. As I’ve remarked before, there’s a life in the eyes of Lawrence’s portraits that few can match. Where Lawrence paints a true, living image, Sully is sadly just another pretty face.
Posted by Bob at 5:34 AM