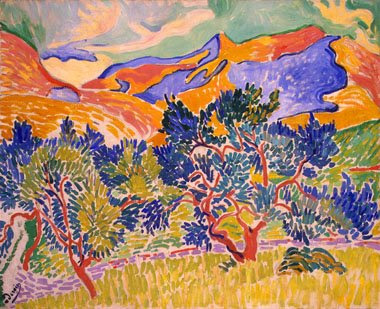 Andre Derain, friend of Henri Matisse and fellow Fauve, was born on June 10, 1880. As part of the “beasts,” Derain followed the work of Matisse and later brought the style to the English landscape.

While Matisse was living in 1905 in Collioure, France, on the Riviera, he invited Derain to join him and his family to partake of the beautiful scenery, which Matisse called “la bonheur de peinters”—the joy of painters. Derain soon found himself absorbing the wonderful light and color around him and produced such works as Mountains at Collioure (above). Mountains at Collioure shows some of Van Gogh’s influence in the expressive brushstrokes, but the use of color is in accord with Matisse’s purely decorative, purely entertaining goals, free of Van Gogh’s expressionist, angst-driven use of color. 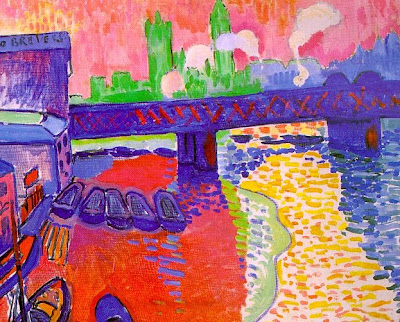 The art dealer Ambroise Vollard sent Derain to London in 1906, where he painted a suite of 30 paintings depicting the London cityscapes in Fauvist style. Charing Cross Bridge, London (above) bears little resemblance to the actual bridge in terms of color, but proves that the Fauvist style could exist outside of the “native” environment of the colorful south of France. 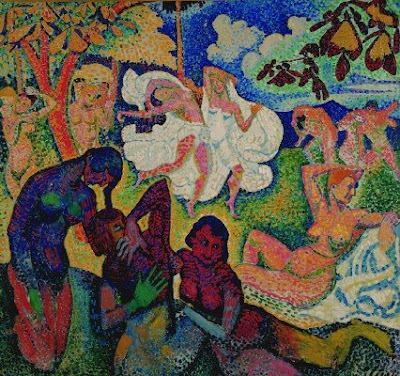 Derain later became friends with Picasso, sharing an interest in African Art with the then-Cubist artist. Critics love to present the contemporaries Picasso and Matisse as heated rivals, but they actually were friendly and corresponded frequently. Derain’s art acts as almost a bridge between the two vastly different, yet both exceptional artists. His Golden Age above shows the influence of Matisse’s works such as Luxe, Calme, and Volupte in the figures on the right as well as the primitivism of Picasso’s African-inspired figures in Les Damoiselles d’Avignon in the darker figures on the left.

His service in World War I robbed Derain of several years of his career. After gaining success in the 1920s, partly on the coattails of Matisse’s success, Derain unfortunately allowed himself to accept an offer to visit Germany as a cultural ambassador during the Nazi occupation of Paris during World War II. Despite the Nazi rejection of Fauvism as a “degenerate art” movement, Derain’s visit became a public relations coup for the Nazis. Supporters accused Derain of collaboration after the war’s end, which may still affect his reputation today.
Posted by Bob at 6:19 AM