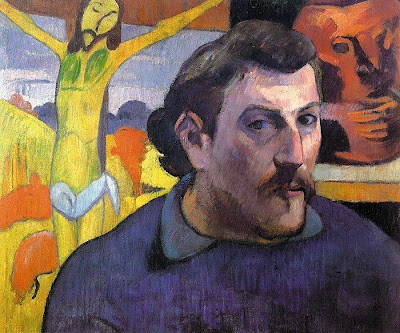 “To me, barbarism is a rejuvenation,” boasted Paul Gauguin, the French Post-Impressionist famous for “going native” and those 9 tumultuous weeks in Arles living with Van Gogh, born on this date in 1848. His Self Portrait With Yellow Christ appears above. Gauguin lived the dream that every over-civilized person dreams of: breaking the bondage of a boring job (he was a stockbroker) and going off to live among beautiful natives in a beautiful island paradise. Gauguin arrived in Tahiti on June 8, 1891, the day after his 43rd birthday, in what was essentially a rebirth for him as an artist. 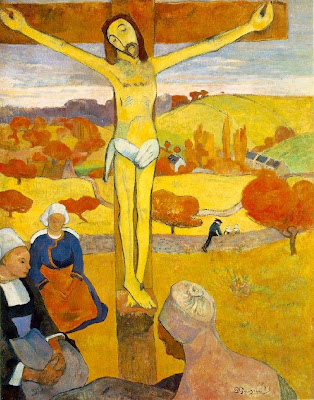 Gauguin’s mind was a cauldron of influences: his time spent with Camille Pissarro and Paul Cezanne learning technique, his fascination with European Folk Art, the love of Japonisme that he shared with Van Gogh, and ultimately the primitivism he embraced in his time in Tahiti. All of these influences were seamlessly coupled with his deep spirituality. As can be seen in his Yellow Christ (above), the same painting in the background of the Self Portrait at the top of this post, the flat areas of color reflect the influence of Japonisme, but the peasant dress of the women at the foot of the Cross pays homage to the simple people documented in Folk Art, while the strong outlines separating the colors and lack of perspective mimic more primitive art styles. Gauguin’s Yellow Christ transcends time and culture in embracing all of these elements and more. The sum of these influences far exceeds the expressive power of the parts. 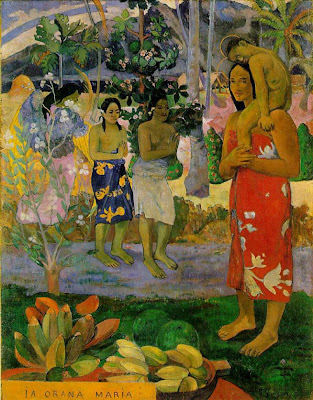 An even more blatant appropriation of Christian imagery appears in La Orana Maria (Ave Maria) (above). Gauguin recasts the Virgin Mary and infant Jesus as Polynesian mother and child in native dress but with the classic halos representing holiness. The tropical background and tropical acceptance of nudity (as seen in the topless women paying homage to the Tahitian Mary) defy all Eurocentric expectations of what such a devotional scene should be. Clearly, Gauguin felt great respect for these people and what their culture’s different perspective could offer, as can be seen in his memoir of the time, Noa Noa. It’s hard today to appreciate fully the power of the tropics’ exoticism held on the imagination of Western civilization. (For example, when Herman Melville, a contemporary of Gauguin, was alive, he was known as “the man who lived with the cannibals” and wrote about it in his popular works Typee and Omoo and not as the author of Moby-Dick.)

I’m always intrigued by such eclectic, inclusive spirituality as that seen in Gauguin’s work. I believe in catholicism (little “c”), i.e., universality, in my Catholicism (big “C”). Gauguin never left the islands, dying of syphilis in 1903 and finding his final resting place in the Marquesas. The Ecclesia Gnostica Catholica, the Gnostic Catholic Church, sainted Gauguin (a distinction he shares with William Blake), showing that even sainthood is in the eye of the beholder. Devil or angel, sinner or saint, Gauguin speaks to a deeper, perhaps darker side of us all.
Posted by Bob at 5:47 AM