The Tactility of Desire 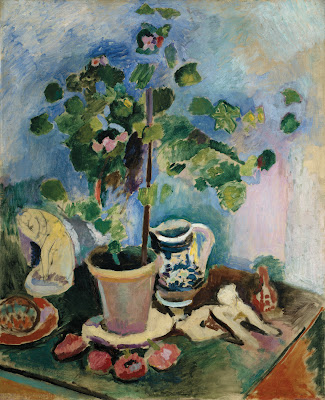 
“I sculpted as a painter,” Henri Matisse once maintained. “I did not sculpt like a sculptor.” The exhibit Matisse: The Painter as Sculptor opening on June 9th at the San Francisco Museum of Modern Art tries to rewrite Matisse’s self-deprecating remarks and return his sculpture to its proper place in the overall scheme of his ground-breaking modernist work. “We can acknowledge the primacy of [Matisse’s] painting without valuing sculpture, drawing, or printmaking any less,” writes Jay McKean Fisher in the catalogue to the exhibit, expressing the overall goal of the exhibit not to play down the power of Matisse’s paintings but to elevate sculpture to the secondary but not subservient level it deserves in his oeuvre. Matisse’s Still Life With Geranium (above) features his sculptures The Thorn Extractor and Woman Leaning on Her Hands to the left and right, respectively, of the flower, emblemizing the organic unity of Matisse’s painting and sculpture at the heart of the exhibit.

Steven Nash, Director of the Nasher Sculpture Center in Dallas, Texas, sets the tone for the catalogue in his opening essay, “The Other Matisse.” Nash sees Matisse as cultivating “an image of himself as an amateur sculptor” to allow himself “considerable freedom… in his exploration of the medium.” For Matisse, “sculpture provide[s] a means of thinking and feeling that painting did not and could not, in other words, a distinct epistemological system.” Nash goes on to show how Matisse moves from painting to sculpture and back again in a never-ending cycle of seeking solutions to issues of two- and three-dimensionality and volume that neither medium could answer alone. Along the way, Matisse breaks new artistic ground not only in his paintings but also in his sculpture. “No parallels exist in early modern sculpture for the abstractions of form that Matisse achieved at this early date,” Nash claims. 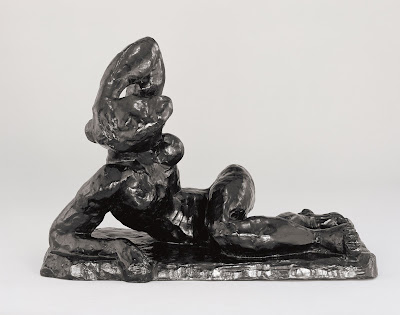 One of the finest examples of this interplay between formats, which Nash sees as “always complex and not just the one-way street from painting to sculpture that is too often claimed with implications of prioritization,” exists between the sculpture Reclining Nude I (Aurora) (above) and the painting Blue Nude: Memory of Biskra (below). Here, the sculpture existed before the painting, inspiring the voluminous representation of the nude, assisting Matisse in realizing in paint the solutions he had discovered in clay. Sculpture frees Matisse’s mind and spirit, permiting him “vicarious possession of [his] models” through the physicality of clay, resulting in a “tactility of desire” and a “sexual candor” painting alone may never have achieved. 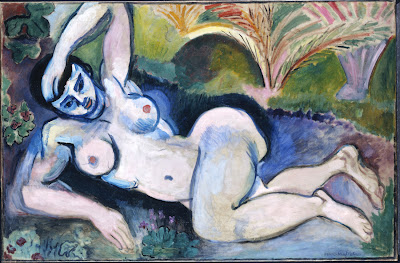 This transformation, which Matisse described as the desire to “condense my sensations,” owes much to the “direct sensual involvement” of sculpture and falls into place with the “revisionist view of Matisse now gaining currency that shows his passionate side” in the wake of Hilary Spurling’s invaluable two-volume biography of Matisse.

Dorothy Kosinski, Senior Curator of Paintings and Sculpture at the Dallas Museum of Art in Dallas, Texas, examines the issues of influence in “Matisse and His Contemporaries.” For Matisse, Auguste Rodin “was a starting point, a father figure, [and] the object ultimately of Oedipal fury,” as Kosinski shows. This exhibit strives not to reduce Matisse’s sculpture to a sum of his influences, but to illustrate how Matisse takes those influences to address the same modernist concerns of his contemporaries, such as Picasso and Giacometti. For example, Matisse views the “fleeting movements and fractions of seconds” captured in the sculpture of Rodin and Degas and tries to sculpt figures “in stasis but hardly at rest.” Matisse’s sculptures take the movement of Rodin and Degas but marry it to the architectural grounding of the painting techniques of Cezanne and Courbet while retaining the same core tensions. Eventually, Matisse sculpted figures consisting of nothing but torsos, the “densest region” of the body, “the source of its physical power and balance,” which Kosinski recognizes as the heart and soul of Matisse’s sculpture and the source of their continuing ability to fascinate.

We discover the interplay between Matisse’s drawing and sculpture in Jay McKean Fisher’s essay, “Drawing Is Sculpture Is Drawing.” Fisher, Senior Curator of Prints, Drawings, and Photographs at The Baltimore Museum of Art in Baltimore, Maryland,
finds that “the very legibility of [Matisse’s] artistic process makes its apprehension by the viewer essential” and proceeds to lead us towards that apprehension through the wealth of studies and drawings (many never exhibited before) that reveal so much of the master’s process. For Matisse, the act of drawing, especially the tactile use of erasure and stumping, recalled the same sensation of using clay, marrying the two media in his imagination. Recalling that Matisse’s own “writings on art embrace a commitment to explanation,” Fisher helps enfold the reader in that same embrace.

This same desire for self-revelation comes into play in Oliver Shell’s essay “Seeing Figures: Exhibition and Vision in Matisse’s Sculpture.” Shell shows how Matisse’s sculptures how a “visual self-consciousness” and a “made-to-be-looked-at-ness” through a series of installation photographs and studio photos documenting how Matisse himself desired that these sculptures be seen in the context of his other works. Matisse allowed himself to be photographed by Edward Steichen, who employs a “pictorialist rhetoric—rhetoric specific to the depiction of artistic genius” to present Matisse as more than just a painter through his devotion to sculpture and the goal of being an overall artist. In this “visual self-consciousness,” even sculptures such as Large Seated Nude (below) become “a surrogate viewer occupying the space of the museum-goers while conditioning and instructing them about the ideal mental attitude with which to confront art.” Matisse’s sculptures actually dictate how they are to be viewed, inviting the viewer to ease back and allow the play of shapes and forms to wash over his imagination. 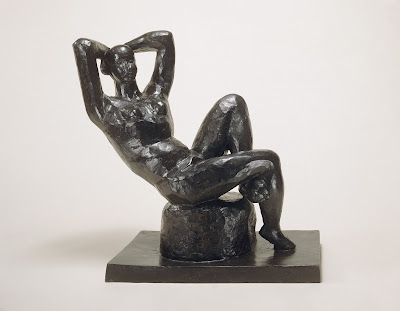 Ann Boulton concludes the collection of essays with “The Making of Matisse’s Bronzes,” the first technical examination of the materials and techniques, most of which were grounded in the nineteenth-century training Matisse received, through the use of laser-scanned computer models and x-rays.

The exhibit and catalogue of Matisse: The Painter as Sculptor achieve their stated goal of unifying the various media Matisse used to examine the outer reaches of his imagination. Just as Matisse’s sculptures are best seen in the round to appreciate every nuance, the various essays of the catalogue each offer a new perspective on the works and Matisse that add up to a well-rounded masterpiece.

[Many thanks to the San Francisco Museum of Modern Art for providing me with a review copy of this book and for providing the images appearing above.]
Posted by Bob at 6:02 AM