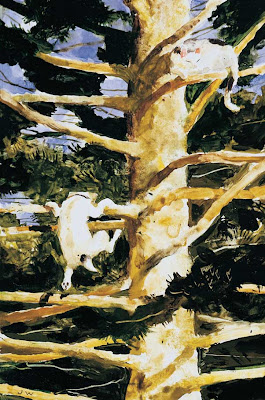 Jamie Wyeth (b. 1946), Tiller Catting (2003), combined mediums on board, collection of Phyllis and Jamie Wyeth.

“I much prefer dogs to people,” says Jamie Wyeth in Dog Days, the companion catalogue to the exhibit Dog Days of Summer: Works by Jamie Wyeth at the Brandywine River Museum in Chadds Ford, Pennsylvania, in the heart of “Wyeth country.” “When working with dogs your mind can wander. I love to daydream and I can’t daydream with people next to me.” Jamie Wyeth’s daydreams made real show not only his love of animals but also the amazing technique of the youngest member of American art’s greatest dynasty.

In text taken from an interview with Lee Wierenga, Assistant Curator at the Brandywine and assembler of the Dog Days exhibit, Jamie Wyeth discusses his lifelong affair with animals, especially dogs, and how that affair has inspired some of his art. As Jamie points out, his father Andrew made many wonderful paintings of dogs (Distant Thunder may be my favorite) and his grandfather N.C. painted dogs but no “great” paintings with a dog, but it is more the styles rather than the subject matter of Andrew and N.C. Wyeth that emerges in the work here, such as Tiller Catting (above). Not only is the famous Wyeth attention to natural detail on display as well as the bravura brushwork, but the same impish humor of Andrew’s painting shines through in Jamie’s depiction of the absurd little dog struggling up a tree in hot pursuit. “What people refer to as humor in these works is completely unrehearsed,” Jamie offers, in line with the classic authenticity—a singular living completely in the moment—that distinguishes his and his father’s art. 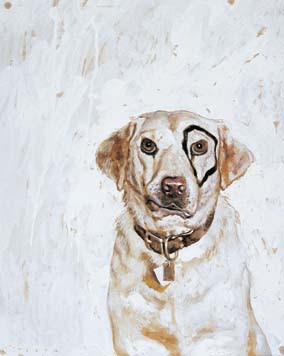 
Another impish moment of Wyeth humor appears in the paintings of Jamie’s dog Kleberg (one example above). Jamie painted on the dark circle around Kleberg’s eye to mimic the markings on Petey, the pet dog from the Our Gang movies. Jamie’s portraits of his many dogs over the years all glow with this same personal touch. “Like with people—when I do a portrait I need to know them personally,” he explains. “So when I choose to paint a dog, usually it’s a dog that I’ve known and lived with, and all of a sudden it strikes me that I have to record it. It’s not necessarily something they do, it’s just what I feel.” The viewer feels the presence of each of these dogs as well. 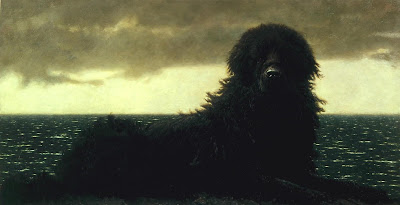 
Perhaps the finest of Jamie’s dog portraits is titled simply Newfoundland (above), which depicts his pet Boom Boom as a looming, almost Sphinx-like presence silhouetted against a coastline. Sadness surrounds this work, which was once owned by the actor Gregory Peck and appreciated by Peck’s son, who died by his own hand. Boom Boom’s own death haunts the painting as well. “The tragedy of big dogs is they die so young,” regrets Jamie. “That is what I hate—and the death of a dog wrecks me infinitely more than the death of a person.” Perhaps for that reason, Jamie’s taste in dogs has shifted to Jack Russell Terriers, which he loves for not having a “small dog mentality.” 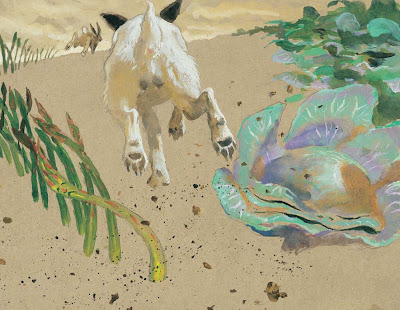 Jamie Wyeth (b. 1946), Cabbages and Kings (“Albert squeezed his eyes shut as the dog ran past”) (1996), combined mediums on paper, collection of the artist.

One of Jamie’s great Jack Russell portraits appears among his illustrations for the book Cabbages and Kings (above). Here we see a Jack Russell literally flying in pursuit of a rabbit. The dynamic sense of movement and narrative power recall the best illustration work of Jamie’s grandfather. The synthesis of his grandfather’s illustrative concern with the puckish humor of his father allows Jamie to unite all three generations of Wyeth artists in this single image.

“There was a wonderful article recently saying that [dogs] are a species in constant pursuit of the absurd,” Jamie recalls at one point, “which is a perfect description of them.” Jamie Wyeth’s paintings of dogs pursue this same absurdity we call life with a warmth, humanity, and humor that will appeal to the dog lover and art lover alike.

[Many thanks to the Brandywine River Museum in Chadds Ford, Pennsylvania for providing me with a review copy of Dog Days as well as images from the exhibit Dog Days of Summer: Works by Jamie Wyeth.]