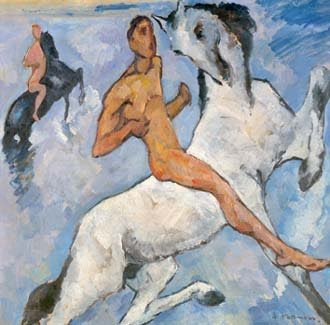 Heinrich Nauen, one of the founding members of the German Expressionist group Die Brucke, was born on this date in 1880. His Schwemmereiter von Blauem Grund appears above.

Nauen studied the Impressionists, Post-Impressionists, and the Fauves before coming into his own style of Expressionism. He founded Die Brucke group with Ernst Ludwig Kirchner, Erich Heckel, and Karl Schmidt-Rottluff and exhibited with the Berlin Secession in 1907. Alas, as with many German artists of the early 20th century, Nauen’s art suffered under the label of “Degenerate Art” by the Nazi regime and his career as an artist and a teacher of artists was cut short. 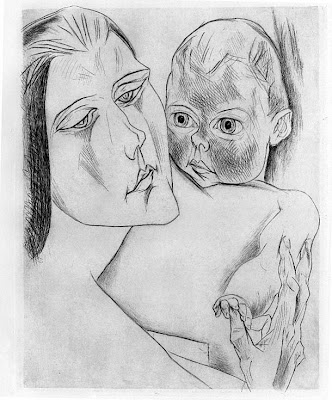 Nauen received more criticism than most Expressionists for his closeness in style to Van Gogh. As can be seen by his drawing Mother and Child above, Nauen used the same expressive line that Van Gogh did to express psychological anguish. The distortion of the faces in Nauen’s drawing equals that in many of Van Gogh’s drawings and paintings. I’ve always been fascinated in how the German Expressionists discovered artists such as Van Gogh and Edvard Munch so early on and assimilated so much of their style into their own. From an art history perspective, the German Expressionists serve as a nexus of influence, culling in so many previous styles and influencing so many after them. Even a relatively minor figure such as Nauen can captivate audiences simply by the residual effects of these influences, by the very residue of genius.
Posted by Bob at 5:56 AM