The Who and Why of Clyfford Still 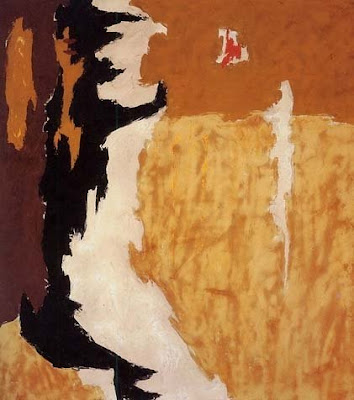 When I’ve tried to school myself on modern art in America, I’ve always run into a brick wall whenever I’ve come across the name of Clyfford Still. Starting this July 14th, an exhibit at the Denver Art Museum in Denver, Colorado tries to pull down some of that wall and offer a peak at the work of possibly the first Abstract Expressionist. Clyfford Still Unveiled: Selections from the Estate offers a first taste of the collection of the Clyfford Still Museum, scheduled to open in 2010.

According to the press release, the thirteen works to be put on view at the Denver Art Museum represent just a tiny sliver of the approximately 2,400 works by Still in the estate, which was bequeathed to the city of Denver in 2004. That collection represents an amazing 94% of Still’s total oeuvre, much of which has never been exhibited and none of which has been seen since being sealed away upon Still’s death in 1980. Still’s reputation has been literally frozen for over a quarter century thanks to his obsessive control over his work. Still’s will stipulated that the works could only be exhibited in a gallery built to his specifications. Thirty years later, his wish will be granted.

A lecture to accompany the exhibit has been titled “Who Is Clyfford Still and Why Does He Matter?’—two excellent questions. Although the new museum will ultimately display Still’s early figurative work, including a self portrait from 1940, the real interest lies in early Abstract Expressionist works such as 1944-N No. 1 (above), an early version of a work now at the MOMA in New York. With that painting from 1944, Still can claim to be the first artist working in an Abstract Expressionist style, before his good friend Mark Rothko, Willem de Kooning, and even Jackson Pollock, all of whom enjoyed the limelight while alive and greater fame in death. After a career marked by a stunning lack of self-promotion amidst the rabidly self-promoting New York City art scene of the 1950s and 60s, Still moved to Maryland in 1961, remaining there for the rest of his life, drifting off into obscurity.

I am simply amazed that a major artist can so easily erase himself from art history. When someone who died in 1280 slips through the cracks of time, I understand, but Still’s career remains within the living memory of many artists and art critics. To look at such works as 1957-D, No. 1 (above) and compare its jagged fields of color with the softer edges of Rothko’s colors or the “zipped”-closed colors in Barnett Newman’s paintings makes me want to learn more about Still and finally tear down that wall.
Posted by Bob at 5:54 AM