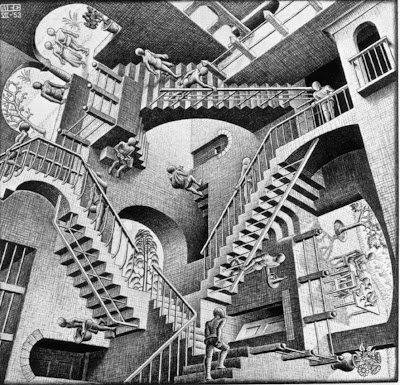 One of the most loved and reproduced 20th century artists, M.C. Escher, celebrated his 109th birthday yesterday, June 17th. Born Maurits Cornelis Escher in The Netherlands in 1898, Escher has been amusing and befuddling viewers for decades with his mathematically influenced works, such as the confounding Relativity above. 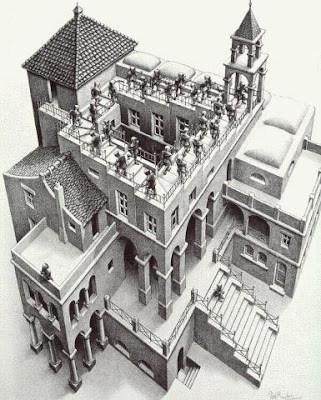 Escher originally studied architecture before devoting himself to the graphic arts. His architectural background comes across clearly in many of his works, such as his Ascending and Descending above. It takes an amazing mind to create such an impossible structure so believably. Once you visually enter into one of these impossible spaces and mentally try to climb the steps, you realize that you’re just running in circles, but that doesn’t make them any less fun. 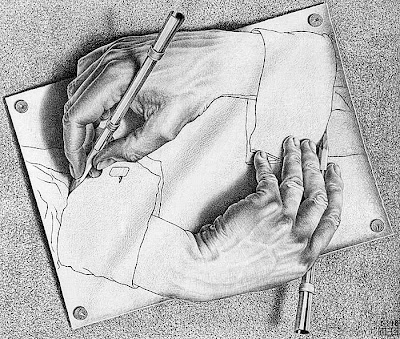 Douglas R. Hofstadter’s Godel, Escher, Bach: An Eternal Golden Braid has sat near the top of my “got to read someday” list of books for years. A friend who read it years ago tells me that it’s a bit dated, but it’s hard to resist any analysis of the mind behind the “chicken and the egg” effect of Drawing Hands (above), beautiful not only for its imaginativeness but also for its clear draftsmanship. The Official M.C. Escher site contains galleries of these mathematical works as well as galleries of his earlier non-mathematical linoleum cuts, woodcuts, and engravings, all beautiful in their own way.
Posted by Bob at 5:43 AM