“In our so very civilized society it is necessary for me to live the life of a savage,” wrote Gustave Courbet, the father of French Realism born on June 10, 1819. “I must be free even of governments. The people have my sympathies, I must address myself to them directly.” Courbet was nothing if not direct in his address to his audience or in his choice of subject matter. Courbet’s dedication to realism, to portraying his time exactly as it was, free of all mythology and Romanticism, inspired the Impressionists to seek out the everyday in their subject matter and helped liberate all Realist painters ever since.

Courbet’s A Burial at Ornans (above) captures the scene of Courbet’s uncle’s funeral, with realistic portraits of the actual attendees of the funeral. With this simple scene of simple people, Courbet set off a firestorm in the art world. Courbet saw his Burial as “the burial of Romanticism,” which is, of course, an exaggeration, but speaks a truth about how this work tamed the excesses of Romanticism and replaced it with a new respect for the quotidian lives of regular people as an acceptable subject for painting. No longer would the gods and goddesses of mythology and the kings and queens of Europe dominate canvasses.

Art was serious business for Courbet. “I have studied the art of the masters and the art of the moderns, avoiding any preconceived system and without prejudice,” Courbet wrote. “I have no more wanted to imitate the former than to copy the latter; nor have I thought of achieving the idle aim of art for art’s sake.” Behind Courbet’s Realism lies a Socialist political agenda in tune with the struggle of the everyman and everywoman for freedom and dignity. 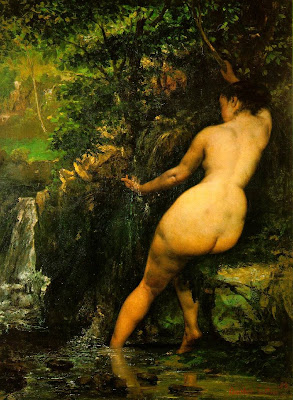 The most striking aspect of Courbet’s realism is his painting of the female nude. Sir Kenneth Clark in his still-valuable study, The Nude, points to Courbet’s Le Source (above) as one of the landmark nudes in the development of the genre. No longer was it necessary to “cover over” the nude body with mythological tags of Venus or Aphrodite. Courbet easily lays claim to the most audacious nude ever, The Origin of the World, a nude so audacious that I can’t show it here and still claim to run a “famly-friendly blog.” 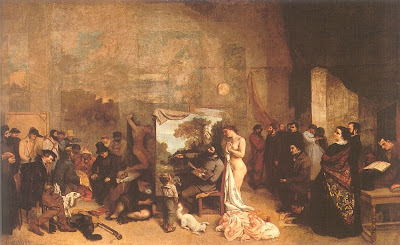 Anyone interested in seeing Courbet’s work should visit the Musee d’Orsay in Paris, which owns all of the works I’ve discussed here, including The Painter’s Studio (above). In The Painter’s Studio, Courbet takes stock of his work and takes pride in his devotion to his vision. Although he sits at the easel and paints a landscape, he is surrounded by the simple, honest people who populated his paintings, as well as by a partially covered nude woman, who looks over his shoulder and seems to nod approvingly. Courbet still has our sympathies, even today, and has much to teach us not only about looking at art, but also about looking at life.
Posted by Bob at 6:27 AM

I've always considered Courbet the father of "hotel, motel" art. You know, the sofa sized paintings you can buy "this weekend only!!!" down at the Hilton ball room with lots of texture depicting some landscape, somewhere that will match the colors of your couch. It's not Courbet's fault but when I look at his landscapes that's what I think of.

If you've been to a hotel with "The Origin of the World" or something like it hanging on the wall, then you and I have been staying in very, very, very different hotels.

I know what you mean about those "Starving Artists" sales, though. My wife and I went to one and I found it more amusing to figure out what name artists the nameless artists were trying to copy, usually unsuccessfully.