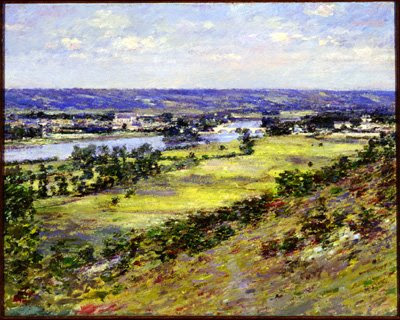 Theodore Robinson, perhaps the finest of the American Impressionists, was born on June 3, 1852. Robinson traveled to Giverny, France in 1888 to meet Claude Monet and eventually became Monet’s next door neighbor and close confidant. Robinson’s Valley of the Seine from Giverny Heights appears above.

After studying with Carolus-Duran (also the teacher of John Singer Sargent) and Jean-Leon Gerome (also the teacher of Thomas Eakins), Robinson traveled to Giverny as part of the colonizing wave of American painters seeking out Monet and the secrets of Impressionism. One painter, Theodore Butler, even married the daughter of Monet’s companion, much to the displeasure of Monet, as can be seen in Robinson’s diary entry. “Monet rather upset and apprehensive, which is perhaps natural enough—I had to reassure him,” Robinson writes. Robinson commemorated the wedding with his painting The Wedding March (below). 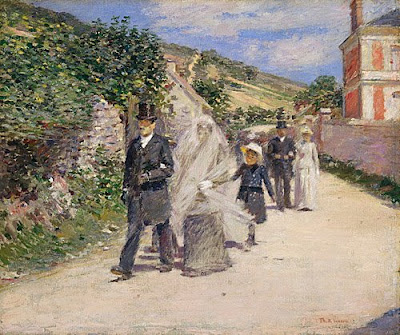 I’ve always thought of Robinson and John Twachtman as the two finest American Impressionists. Robinson returned to American in 1892 and eventually taught briefly at the PAFA. Because his style was so close to that of Monet’s, he suffers in Monet’s shadow. The 2005 exhibit titled In Monet’s Light: Theodore Robinson at Giverny helped bring Robinson out of that formidable shadow.
Posted by Bob at 5:58 AM