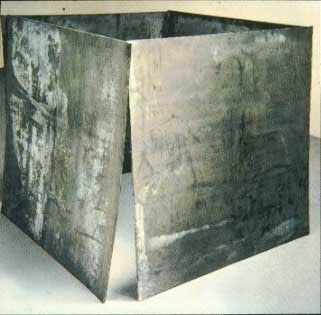 Peter Schjeldahl’s review in the June 11/18 issue of The New Yorker of the Richard Serra retrospective at the MOMA leaves me befuddled. Despite finding that “a bracing bleakness descends,” when he thinks of Serra’s art, Schjeldahl can’t help but feel that “he is not only our greatest sculptor but an artist whose subject is greatness befitting our time.” I have grave doubts and reservations about Serra’s greatness and how “befitting” he is to our time. Serra’s One Ton Prop (House of Cards), one of his many menacing, “could fall at any minute” sculptures, appears above.

I don’t think I can ever think of Serra and not think of the workers who have been killed or maimed by his works. I understand that the apparent danger of his works is the source of their bite, but that danger has been more real than apparent more than once. In 1971, a worker was crushed beneath a two-ton metal plate at the Walker Art Center and died. When a 16-ton piece fell on a worker in 1988 as he was helping dismantle it, that worker lost his leg. The inconvenience and, possibly, danger of Serra’s Tilted Arc (below), which had been installed in New York’s Federal Plaza, led to its removal in 1985. Defending Tilted Arc, Serra said at the time, “I do not think it is the function of art to be pleasing. Art is not democratic. It is not for the people.” Such anti-democratic, anti-populist remarks sound strange in the mouth of a man who welds together gigantic public sculpture. If public sculpture isn’t for the public, who IS it for? 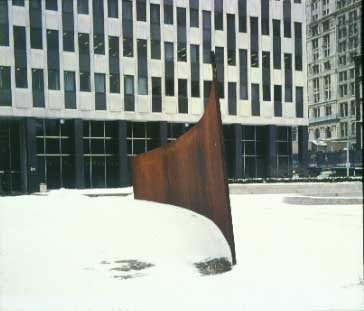 Nonetheless, Schjeldahl responds that “[t]aking a childlike view may be the best way to relax with and, to the extent possible, enjoy Serra’s art. Don’t try to understand. Play.” I ask you, would you let your children “play” in these sculptures? (The MOMA actually tries to portray these works as jungle gyms on steroids in some of their advertising for the Serra show, placing wide-eyed toddlers in the belly of the metallic beast.) I appreciate Schjeldahl’s attempt to get the viewer to loosen up and enjoy the ride, but I wouldn’t let a child ride a rusty rollercoaster either. Issues of safety aside (and I’m overstressing those issues, I realize), I can’t understand how Schjeldahl sees intimacy and joy inside these sculptures. I’ve only been inside a Serra sculpture once and recall any lasting memories other than claustrophobia and forbidding coldness. Of course, those may be my own projections, but how inviting can rusting metal possibly be, regardless of how beautiful that patina becomes?

Schjeldahl sees Serra “conserv[ing] a battered modernist confidence in the collective genius of experts, a priestly class that confers meaning and direction on society,” believing that “[h]ardheaded secular culture can make no greater claim to spiritual efficacy than it does in this show, appropriately housed in the high church of the twentieth century that is MOMA.” Perhaps putting a positive spin on Serra’s anti-populist strain, Schjeldahl returns to his child metaphor and finds comfort in the idea that Serra’s sculpture represents the work of “sensationally competent adults” in the world. I just can’t buy into that brand of elitism distancing the daddy artist and infantilized viewer. If, as mentioned elsewhere, art is the new religion, I don’t see Serra’s denomination offering comfort or inspiration, but rather a distant and unresponsive god.

Perhaps it’s Serra’s strutting machismo that turns me off, although perhaps even Serra himself now finds the “cowboy” mentality distasteful, as evidenced by his drawing of an Abu Ghraib prisoner with the caption “STOP BUSH” at the 2006 Whitney Biennial. If Serra himself has changed or mellowed, his sculptures, despite the wear and rust of the years, continue to threaten and bully those who approach them, if not physically then most definitely spiritually.
Posted by Bob at 5:45 AM