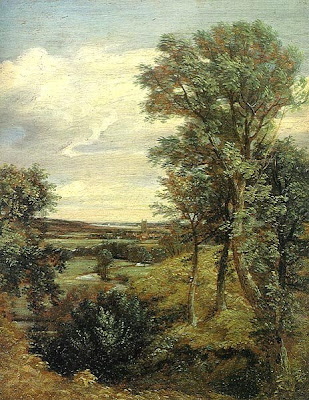 “Painting is a science, and should be pursued as an inquiry into the laws of nature,” said John Constable, British Romantic landscapist born on June 11, 1776. Constable went on to pursue those “laws of nature” in his beautiful landscapes of early 19th century England, such as Dedham Vale (above), the area around his own home. “The great vice of the present day is bravura,” Constable said elsewhere, “an attempt to do something beyond the truth.” For Constable, the truth of nature was more than enough. 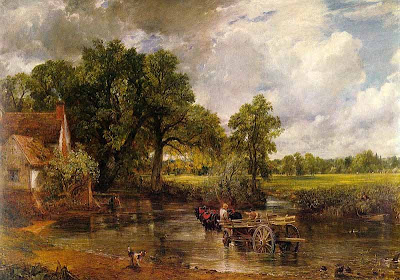 As has been pointed out countless times elsewhere, Constable shares many characteristics with the Romantic British poet William Wordsworth. Constable and Wordsworth were almost exact contemporaries. In 1806, Constable traveled and painted through the Lake District immortalized by Wordsworth in his poetry. Constable regarded Wordsworth’s poetry very highly and even wrote a sonnet to Wordsworth. In turn, Wordsworth contributed to a fund to purchase a painting by Constable for a national gallery. However, the first recorded mention of Wordsworth by Constable is from 1823, and Wordsworth is not known to have ever said anything specifically about Constable, whose reputation in England was slight until the 1820s (and was actually better in France up to then). This is a perfect example of two creative minds in the same cultural and geographic context arriving at similar style, albeit in different media. Constable’s The Hay Wain (above) has always struck me as Wordsworth’s poetry made visual: the depiction of the simple, rural people, fidelity to nature, and a sense of the spiritual truth within nature free of “bravura” technique for the sake of technique. 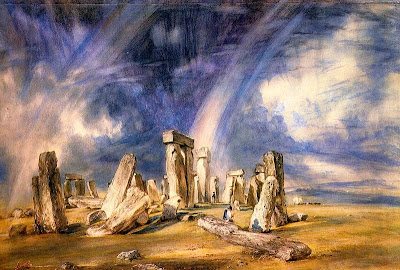 If Constable is the Wordsworth of painting, then J.M.W. Turner, Constable’s more-visionary Romantic contemporary, is the Samuel Taylor Coleridge of painting. I freely admit my bias to Turner over Constable (and Coleridge over Wordsworth, for that matter), but that doesn’t prevent me from recognizing those wonderful moments in each artist’s oeuvre. Constable’s watercolor of Stonehenge (above) ranks right up there with anything done by Turner, whom I consider the greatest watercolorist ever. Wordsworth’s “spots of time” passages on the Salisbury Plain near the ancient ruins of Stonehenge always stay with me as well. Constable’s best paintings capture those remarkable “spots of time” of nature with an honesty and integrity of a true believer.
Posted by Bob at 6:59 AM