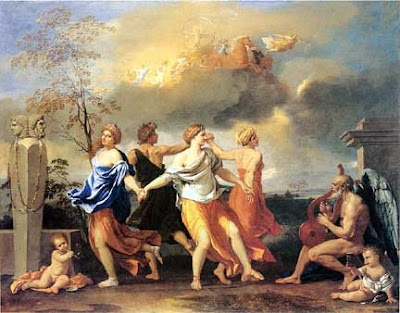 Nicolas Poussin, First Painter to French King Louis XIII and first painter in the hearts of the artists he influenced for centuries afterwards, was born on this date in 1594. Poussin brought a severity and clarity to painting that typified the Baroque style and drowned under the excesses of the Rococo before resurfacing in popularity again in the 18th and 19th century as part of the first glimmers of modern art historiography and museology. With a grace, simplicity, and intelligence rarely found in a single artist, Poussin’s influence has danced through time to our own age. Poussin’s A Dance to the Music of Time appears above.

As Andrew McClellan points out in his Inventing the Louvre: Art, Politics, and the Origins of the Modern Museum in Eighteenth-Century Paris, Poussin’s discussions about art with Andre Felibien led to Felibien’s publication in 1666 of Discussions Concerning the Lives and Works of the Most Excellent Painters, Ancient and Modern, one of the earliest attempts to map out the field of art history. Felibien’s work led to the development of the Louvre, which created the model for what we know as the modern art museum. Poussin, therefore, can be considered the “godfather” of art museums. Or at least I’d like to think so. 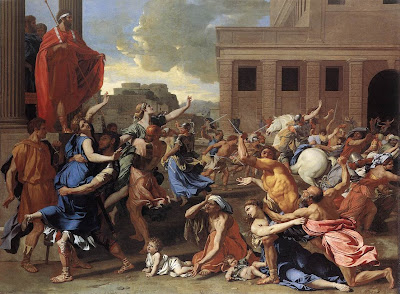 Poussin’s monumental scenes of ancient history, Christian theology, and world mythology combine the glories of an unreal subject with a meticulous eye for the real—both physically and emotionally. As can be seen in The Rape of the Sabine Women above, Poussin endows each figure with a emotional life among the greater turmoil. Whenever I see this painting, my eye always goes to the elderly woman at the bottom center, between the two fallen children. The gesture of her hand on her head speaks volumes. The Herculean figure to her right is pure bravura draftsmanship and the red-cloaked figure at the upper left screams boldness and authority, but it is this simple woman’s gesture that strikes me most immediately. Poussin’s ability to create strong emotion in a viewer has been examined at length by T.J. Clark in his The Sight of Death (my review here). Clark’s book helped me appreciate this aspect of Poussin even more, and opened my eyes to Poussin’s masterful use of planes of depth to tell a story. The Rape of the Sabine Women reaches back further and further into the picture, drawing us into a world seemingly more three-dimensional than our own.

Whenever I look at Benjamin West’s gigantic paintings at the PAFA or think of Jacques-Louis David’s work during the French Revolution, I see the hand and the mind of Poussin working through time and still at work today.

[A very special “Poussinpalooza Day” to Poussin authority David Packwood of Art History Today, who is no doubt cringing at my humble attempt at a tribute.]
Posted by Bob at 6:00 AM