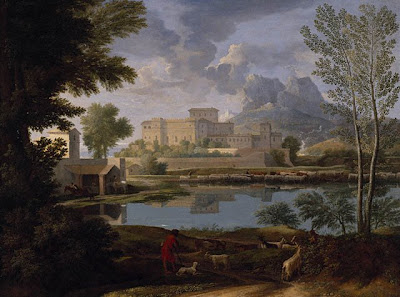 T.J. Clark’s The Sight of Death accomplishes a rare feat in art history writing: it both delivers and fails to deliver for both the art history expert and the art history amateur. It frustrates on so many levels by raising hopes on so many. Subtitled “An Experiment in Art Writing,” The Sight of Death, like all good experiments, raises valuable questions, leaves some unanswered, and opens a door for each of us to reproduce his experiment, given the time and opportunity, but, hopefully, with better results.

Clark begins with the simple premise of prolonged, repeated exposure to two paintings by Poussin: Landscape With a Calm (above) and Landscape With a Man Killed by a Snake (below). From January 2000 through 2003, Clark returns again and again to these paintings, attempting to capture the effect this exposure has on him in dated journal form, documenting his impressions and art history riffs as well as attempting to engage the works through his poetry. Along the way, Clark allows himself to wax metaphysical on the nature of his experiment, specifically the ethics and politics behind asking works of art to “speak” to his particular situation and time. 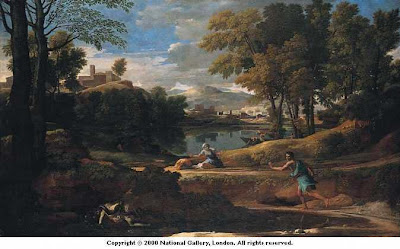 From an amateur’s perspective, Clark’s work allowed me to peek over the shoulder of a true art history professional and “see” through his eyes how artificial versus natural light plays a role in how we see a painting, how special planes within a work’s composition can assist the narrative, how the chemistry of varnishes and pigments affects contrasts and coloration over time, and how cleaners and restorers can sometimes do more ill than good. The detailed close-ups throughout the book help point out these tiny aspects, making you appreciate simultaneously Poussin’s talent and Clark’s insight. Clark’s meditation on Poussin’s painterly “economy” in such details held that aspect into a new light for me. “Economy is the guarantor not simply of aesthetic force… but of truth,” Clark writes. “Striking through to the minimum form of a likeness is getting the likeness once and for all.” (page 109)

Unfortunately, Clark himself rarely strikes out for truth of any kind. “Paintings in a sense ought to disappoint us—disappoint our wish to have them be more than they are, to be fully and endlessly discursive (propositional), to be serious in ways we know about,” Clark says (emphasis in the original; page 27). Clark disappoints by shying away from such seriousness of intent. After bemoaning art history’s earlier problem of formalism, i.e., its disengagement from the “real” world of death, taxes, and wars, he finds equal fault with a more engaged approach, which he sees as putting art at “any tawdry ideology’s service” (page 122).

Clark tries to pawn this discomfort off on Poussin, crediting the artist’s own “ambivalence toward semiotics.. the problem of painting, like human activities in general, having to mean something” (page 163), going so far as to accuse Poussin’s paintings of luring us in with their seeming readability “to alert us precisely to their unreadability” (emphasis in the original; page 175). Even as the dates of the journal approach the “payoff” date of September 11, 2001, modern memory’s most infamous sight of death, Clark flees from connecting the paintings and real life events.

“Writing about pictures,” Clark says, “should not flinch from making sense of the mute things it is looking at…, but it should invent ways for this explicitness to be overtaken again by the thing-ness, the muteness, of what it started from” (page 216). I agree that the work should ultimately return to its mute state, to be heard again, but I never get the sense that Clark every truly allows these works to speak. In the end, Clark peers into the face of the man fleeing the murder at the heart of Landscape With a Man Killed by a Snake and sees only “ultimate horror” at the “[a]ffliction and monstrosity” making up “the true face of utopia,” which leaps “out of the insufferable everyday” (page 240).

In such utopian abstractions devoid of the particulars of this day of this life, Clark frustrates his readers and circles back to the same meaninglessness he begins with. As a failed experiment in art writing, Clark’s work serves as a cautionary tale of allowing your aesthetics and personal politics to seize up your emotions. Even at the end, when Clark contemplates his own personal “sight of death” in the memory of his dead mother’s face, Clark’s seeming inability to experience pure, clear, unimpeded emotion saddened me. Clark early on complains that most art writing consists of “writing pictures to death” (page 8). The Sight of Death never allows pictures to live.
Posted by Bob at 5:30 AM

I'd agree with all that you've said here. When I read the book last year, I experienced much the same feelings about the book being insightful, yet failing to deliver on many fronts. The challenge is to use TSOD to move Poussin studies on- no easy task!