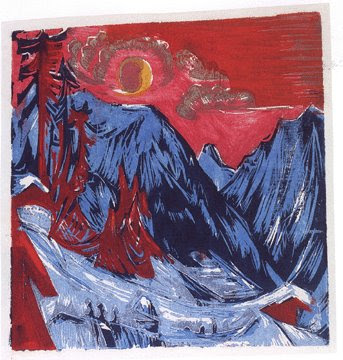 Ernst Ludwig Kirchner celebrated his 127th birthday yesterday, May 6th. Kirchner’s woodcuts are some of the most beautifully expressive of Die Brucke wing of the Expressionist school. (Kirchner’s painted woodcut Winter Moonlight appears above.) After serving in World War I for Germany, he suffered under the Nazi label of “Entartete Kunst” or “degenerate art” and finally took his own life in 1938.

Kirchner and his group were among the first to appreciate Edvard Munch's unique style, drawing the Norwegian artist to Germany, which he came to see as a second homeland before the Nazi era. As with Picasso and many other artists of that era, African art and other “primitive” art forms influenced Kirchner, as can be seen in his Self Portrait With Model (below). Kirchner simplifies the faces into masks, concentrating on the decorative elements of the robe, which itself mimics the colorful patterns found in African art. The raw stylization of his painting, even more evident in his woodcuts, epitomizes for me the most fascinating psychological aspects of Expressionism. 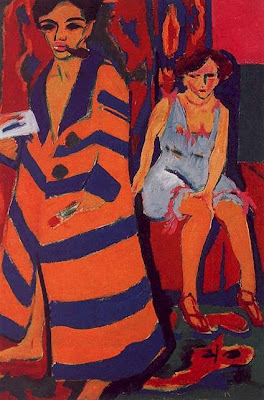 Germany in the first half of the 20th century, like much of Europe, operated like a meat grinder of humanity. Kirchner, unlike many contemporaries who died in World War I, emerged alive, albeit a broken man, yet found meaning in the anti-academic freedom of the new style of Expressionism. Sadly, he lived to see Germany descend into the madness of Hitler’s regime and the degradation of German culture before ending his life.
Posted by Bob at 5:45 AM