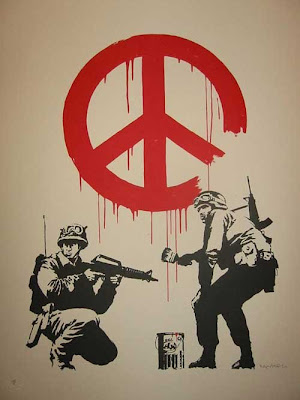 When asked why he does what he does by Lauren Collins in her profile in the May 14, 2007 issue of The New Yorker, British radical graffiti superstar Banksy replies, “I originally set out to try and save the world, but now I’m not sure I like it enough.” It’s such contractions like this one—a famous artist making public art expressing his distaste for that same world—that add up to the (in)famous persona that is Banksy.

Banksy is an anonymous artist with a press agent, a maker of high-priced art who paints a work titled “I can’t believe you morons actually buy this sh*t” after a big sale, and a politically active artist who ridicules politics. Some critics view Banksy as a second coming of Salvador Dali in his worst “Avida Dollars” period, stressing the “bank” in “Banksy.” Other critics swoon over his radical injection of new life into a moribund art world. As Banksy says, “The art world is the biggest joke going. It’s a rest home for the overprivileged, the pretentious, and the weak.” However, Banksy desperately wants to be part of that “biggest joke going,” all the time, as Collins puts it, “flipping off the art world and begging it to notice him at the same time.” 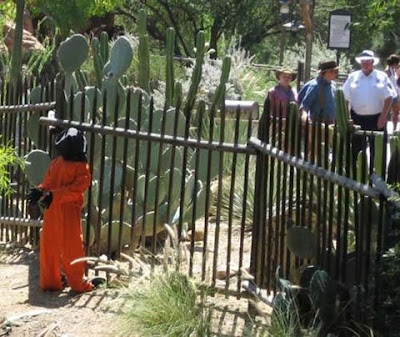 Banksy’s home page (one of the best artist’s sites I’ve seen) catalogues all his famous adventures. Political art, especially anti-war imagery, such as the two soldiers painting a peace sign above, has the most wide appeal. When he visited the West Bank to see the massive security fence between Israelis and Palestinians, he painted tromp-l’oeil “holes” in the fence showing a tropical paradise on the other side. He even snuck into Disneyland and placed a figure (image above; film at Banksy’s site) resembling a hooded, shackled, jumpsuit-clad prisoner from the United States’ Guantanamo Bay Detention Camp. As Banksy points out on his site, Mao Zedong’s first political action was an act of graffiti, so don’t underestimate the power of “street” art to make a difference. Whereas Dali’s works presented the grotesque madness of war in stunning detail, Banksy’s work shows war’s absurdist side as part of the greater absurdities of modern civilization. 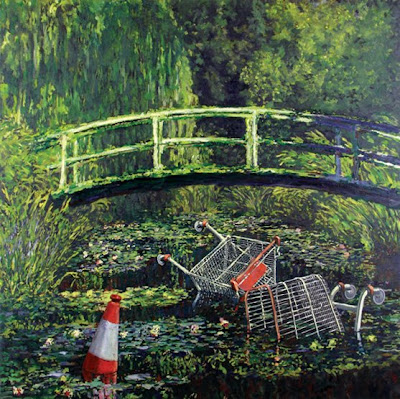 Also like Dali, Banksy takes shots at figures in art history, such as the reimagined Monet above with overturned supermarket carts floating amidst the water lilies. Banksy’s site offers a film of him inserting one of his reworked paintings onto a gallery wall, something he’s done at both the Louvre and the Tate Britain.

Love him or hate him, you cannot deny Banksy’s popular appeal. “Like most people, I have a fantasy that all the little powerless losers will gang up together,” Banksy has said, giving voice to the voiceless, whether they are anonymous struggling artists or the victims struggling under imperial might.
Posted by Bob at 5:49 AM