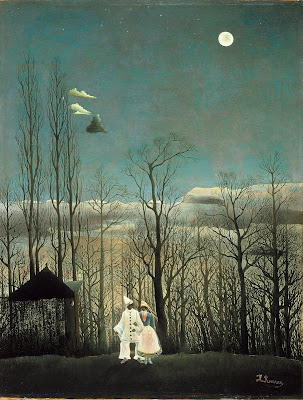 From the epitaph on Henri Rousseau’s grave by his friend, poet Guillaume Apollinaire


Henri Rousseau, French Post-Impressionist famous for his primitive style, was born on May 21, 1844. Although he only began painting in his 40s, he dedicated his life to art after his retirement at 49 from his job as a tax collector. Almost entirely self-taught, Rousseau painted in a style entirely his own, “facing the stars” and following them according to his own blissful whim.

Aside from some advice from Jean-Leon Gerome, Rousseau’s art education was entirely self-inflicted. One of the downsides of this lacking is the sad condition of much of his work today due to his poor technique and choice of student-grade paints. However, the benefit of his fresh outlook and child-like wonder, such as in the Carnival Evening above, more than make up for any technical difficulties. I’ve seen Carnival Evening at the PMA many times and like to think of Rousseau himself as one of the figures dwarfed by the scenery, looking up and facing the stars. 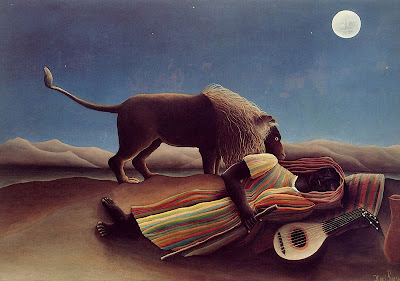 The Sleeping Gypsy (above) , perhaps Rousseau’s most famous painting, comes to life in an episode of the children’s show Between the Lions (one of Alex’s favorites) in a story about how stories are constructed. Rousseau used jungles and exotic animals and figures to construct stories far beyond the everyday life of a Parisian tax collector.

A select few artists, such as Picasso and Robert Delaunay and Sonia Terk Delaunay, recognized Rousseau’s greatness early on, but it took many years for him to receive wider acceptance. Apollinaire’s epitaph for Rousseau begins “We salute you, Gentle Rousseau.” In the often violent world of modern art, Rousseau offers a gentler, more playful alternative.
Posted by Bob at 5:59 AM