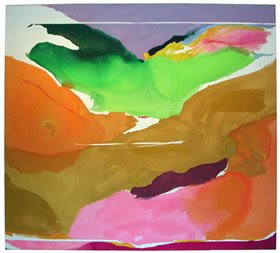 A new release by An Die Musik quartet titled The Painter’s Music/The Musician’s Art features artwork by modern artists Helen Frankenthaler, David Hockney, Robert Motherwell, and Kenneth Noland. Each artist also responds to questions about what kind of music they like and dislike. Standard classical chamber works by Beethoven, Mozart, Shubert, and Schumann appear on the CD. (Helen Frankenthaler’s Nature Abhors a Vacuum is above.)

The relationship between music and visual art interests me almost as much, but in a different way than the relationship between literature (especially poetry) and visual art. I almost find the music-painting link more interesting simply because of the nonverbal nature of the interplay. As Frank Zappa has been credited with saying, “Writing about music is like dancing about architecture.” You just can’t put either into words in a completely satisfying way. If you could, they would cease to be an image or music. It’s this shared ineffable aspect of music and art that brings the two so close in my mind. 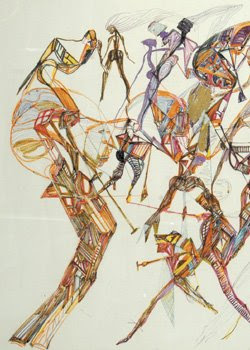 One of the more interesting musicians who painted is jazz great Miles Davis. (One of his original works is above.) Davis’ mind explored so many aspects of music and African-American culture that it was inevitable that he would delve into the visual arts with an Afrocentric flair, yet he brings a modernist, abstract touch to it absorbed through his contact with the abstract art movements that dominated American culture in the 1950s and 60s. I’m not arguing that Davis’ work is museum quality, but I find it interesting as an example of this interplay of music and art.

I couldn’t imagine living without both!
Posted by Bob at 6:26 AM