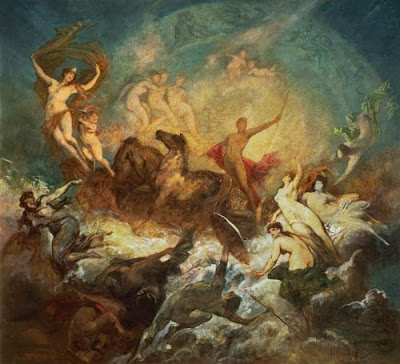 Hans Makart, once the toast of late 19th century Vienna, was born on this date in 1840. Called the “magician of colors” and the “artist prince” in his day, Makart may have been the first true “art star” in the modern media sense of the phrase. His allegorical painting, The Victory of Light Over Dark, appears above.

All levels of society flocked to Makart’s studio salon, cementing his role at the shining light of 1870s Viennese culture. His large-scale, theatrical paintings full of brilliant color appealed to the man in the street as well as the king in the castle. Makart even staged the parade to celebrate Austrian Emperor Franz Josef and Empress Elizabeth’s silver wedding anniversary in 1879. Working in interior design, costume design, and furniture design in addition to painting, Makart’s cult-like status cast an influence on Viennese art and culture for generations, including the work of Gustav Klimt. 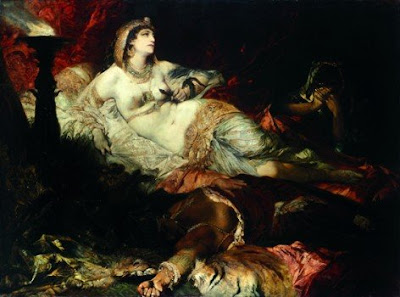 Makart’s oeuvre splits roughly into allegorical paintings, such as The Victory of Light Over Dark (at the top of this post), and historical paintings, often with exotic themes, such as The Death of Cleopatra (above). Nudes abound in his paintings, regardless of theme, presaging the even more risqué use of the human form in Vienna after the turn of the century in the works of Klimt and Egon Schiele. 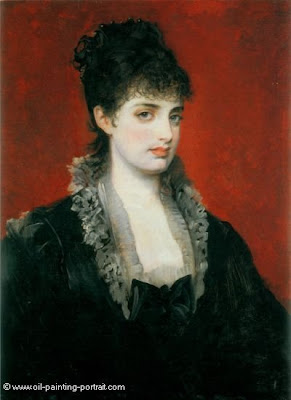 Personally, I find Makart’s portraits the most interesting, particularly in regards to seeing the line of influence from Makart to Klimt. The Portrait of Anna von Waldberg (above), with its vampiric skin coloration, voluptuous coloring, and insatiably hungry eyes, easily stands as a precursor to the great female portraits of Klimt later on.

The vagaries of art fame always fascinate me, especially since reading Ross King’s The Judgment of Paris: The Revolutionary Decade That Gave the World Impressionism, which traced the rise of Eduoard Manet’s reputation against the fall of Ernest Meissonier’s. I remember seeing Meissonier’s paintings at the Louvre and thinking how easily his greatness was recognized, yet, how easily it was forgetten in the wake of new movements in art. How much those new movements and new artists owed to those who came before should never be forgotten.
Posted by Bob at 5:59 AM