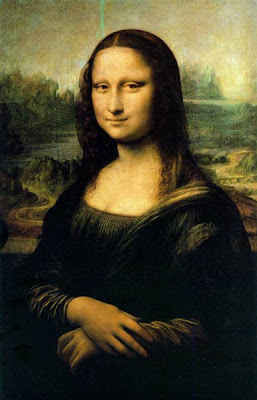 Facts about the young woman sitting in Leonardo da Vinci’s masterpiece the Mona Lisa (above) have been few and far between in the five centuries separating when the painting was made and today. Giuseppe Pallanti, in his book Mona Lisa’s Story, believes that he has found documentary proof of her life. Not only that, but he believes that he has also pinpointed her birthplace and final resting place. (Via Artcyclopedia.)

Lisa Gherardini was born into poverty in Florence, Italy on June 15, 1479. She married Francesco Giocondo, a wealthy silk merchant, in 1494 and the couple had five children. The Mona Lisa’s “other” name, La Gioconda, comes from Franceso’s last name. da Vinci began painting Lisa in 1503, perhaps to commemorate her second pregnancy, and didn’t finish until 1506. Francesco died in 1538, after which Lisa went to live with her daughter Marietta, a nun, in the convent of Sant’Orsola. Lisa died in 1542 and was buried in Sant’Orsola.
Pallanti used tax records and other peripheral documents to trace Lisa’s path through 15th and 16th century Florence. A simple wife and mother, Lisa left no personal writings. The simplicity of her life compounded the elusiveness of her story. Amazingly, her birthplace on the Via Sguazza near the Ponte Vecchio in Florence still stands, abandoned for years. I only wonder how long before it becomes a tourist attraction for da Vinci lovers and da Vinci Code fanatics.

Alas, the art lovers, movie fanatics, and conspiracy theorists may find themselves closer physically to Lisa, but they remain as distant as Walter Pater when he famously described “Lady Lisa”:
She is older than the rocks among which she sits; like the vampire, she has been dead many times, and learned the secrets of the grave; and has been a diver in deep seas, and keeps their fallen day about her; and trafficked for strange webs with Eastern merchants; and, as Leda, was the mother of Helen of Troy, and, as Saint Anne, the mother of Mary; and all this has been to her but as the sound of lyres and flutes, and lives only in the delicacy with which it has moulded the changing lineaments, and tinged the eyelids and the hands. The fancy of a perpetual life, sweeping together ten thousand experiences, is an old one; and modern philosophy has conceived the idea of humanity as wrought upon by, and summing up in itself, all modes of thought and life. Certainly Lady Lisa might stand as the embodiment of the old fancy, the symbol of the modern idea.
Pallanti may have learned some of the secrets of Lisa’s grave, but the personality behind the smile captured by da Vinci’s hand remains “a diver in deep seas” unfathomable by us all. Lisa Gherardini Del Giocondo’s smile speaks for all the silent voices unheard throughout the ages.
Posted by Bob at 5:49 AM