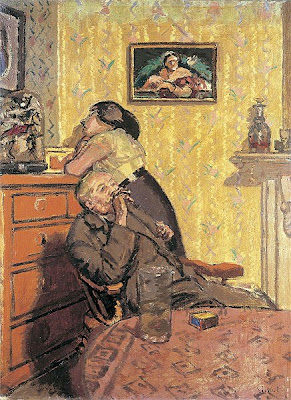 One of the suspects in the unsolved case of Jack the Ripper and a pretty good painter to boot, Walter Sickert entered the world on this date in 1860. Sickert took the techniques of Impressionism and added a more somber, psychological, Victorian veneer, as can be seen in his famous Ennui (above).

Sickert worked briefly as an actor before working as an assistant to James McNeill Whistler, who encouraged Sickert to paint. Sickert soon traveled to France and met Edgar Degas, whose strong draftsmanship and choice of urban subjects influenced Sickert’s development.

Ennui shows two people in a drawing room full of somber color, each looking off in their own little worlds, so close to one another yet completely disconnected. Sickert captures these expressions of ennui perfectly, choosing colors that harmonize with the overall mood as well as using strong drawing to create a sense of tension. Sickert’s choice of a claustrophobic interior to present the interior life of everyday people bears a strong resemblance to similar scenes Edward Hopper would paint from an American perspective decades later. 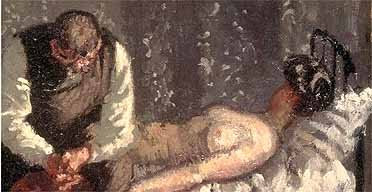 But the truly juicy angle to the life of Walter Sickert comes from his possibly being Jack the Ripper’s assistant or even the Ripper himself! (Not to be confused with Jackson “Jack the Dripper” Pollock.) Mystery writer Patricia Cornwell believes that the painting above, titled Camden Town Murder (named after another, non-Ripper, sensational murder of the time), shows Sickert with his victim. In Portrait of a Killer: Jack the Ripper—Case Closed, Cornwell presents her case for Sickert being the Ripper. Cornwell apparently bought 31 of Sickert’s paintings and envelopes and stamps he may have licked in hopes of finding enough DNA to close the case. In her personal episode of C.S.I.: Art History Edition, Cornwell may even have destroyed one of Sickert’s paintings in her quest.

Regardless of all the sensational fanfare of crime fact and fiction, Sickert remains one of the finest British painters since J.M.W. Turner.