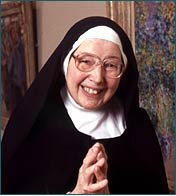 While some friends were asking about my blog at lunch last week, they came up with a great question. So, here I’ll create a virtual milk carton and slap a familiar face on it to ask the question: Whatever happened to Sister Wendy? (The face that launched a thousand PBS fund drives is above.)

Sister Wendy Beckett, according to Wikipedia, is still alive at 77, living a life of prayer and contemplation in a Carmelite nunnery in Quidenham, Norfolk, England. She recently came out of contemplation long enough to give her, uh, blessing to a musical about her life, Postcards From God: The Sister Wendy Musical, which ran in London early in 2007. The tag line to the musical, “Nun Critic Superstar,” says it all.

The good Sister, who can brag of a degree in English Literature from Oxford University, began as a serious art critic, publishing articles in academic art journals before launching her illustrious television career. The books and videos spun off from those series will guarantee her fame long after she’s, shall we say, kicked the habit.

As an Irish Catholic with still-fresh memories of the nuns from my grade school days, I always found it disconcerting to see Sister Wendy floating before old master nudes, her hands flitting about in the air to shape the curves of the flesh in front of her as she described the sensuous features in her lilting British accent. Nathan Lane’s spot-on impression of her on Saturday Night Live captured this otherworldly, yet oddly eroticized aspect of Sister Wendy, who had actually taken the step of becoming a consecrated virgin.

Sister Wendy’s ability to bring great art to a popular audience, however, something not achieved on an equal scale since Sir Kenneth Clark’s Civilisation series in 1969, guarantees her a place in the minds and hearts of art lovers everywhere forever.
Posted by Bob at 6:14 AM

Your friends sound like wonderful, brilliant people! Kudos to them for suggesting the Sister Wendy topic. Your post is lovely little tribute to the beloved Nun/Critic/ Superstar.

They are all that and a bag of chips. And I'm not talking any cheap bag of chips. I'm talking Lays' Masterpiece BBQ chips. The good stuff.