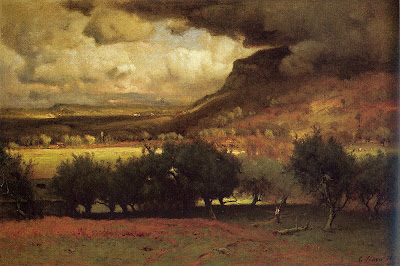 “The true use of art is, first, to cultivate the artist's own spiritual nature,” said George Inness, visionary 19th century landscape artist born on this date in 1840s. A member of both the American Hudson River School and the French Barbizon School, Inness nonetheless carved out his own, spiritual style of painting. Inness’ The Coming Storm appears above.

Thomas Cole, father of the Hudson River School, taught Inness in the 1840s. It’s easy to reconcile the Romantic, even Transcendentalist flavor of the Hudson River School with Inness’ core spirituality. However, when you add the realism of the Barbizon School, which was a reaction to that “loose” Romanticism, Inness truly becomes an interesting figure. The tension of these different schools of thought generates much of the energy in Inness’ art. As can be seen in The Coming Storm, the landscape is realistic yet somehow still infused with Romantic overtones, a beautiful balance of the two worlds.

Inness’ Swedenborgianism allowed him to resolve this duality in his painting. The energy Inness influxed into his landscapes parallels the energy he belived God influxes into all reality. Inness’ spiritual bent followed the larger trend in early 19th century American culture typified by the Second Great Awakening from around 1800 to the 1830s. As with Transcendentalism, much of this spiritual awakening had an intellectual as well as an emotional/spiritual appeal. The continued popularity of the works of Ralph Waldo Emerson and Henry David Thoreau testifies to the power of this spiritually artistic vision.

I think Inness would agree with William Blake, perhaps the greatest of all spiritual, visionary artists (although more in a figural tradition than in landscape), that “If the doors of perception were cleansed, every thing would appear to man as it is, infinite.” Inness cleansed his own perception of the influence of his teachers and other artists and saw through to the infinite in creating his own individual vision of the world.
Posted by Bob at 6:19 AM