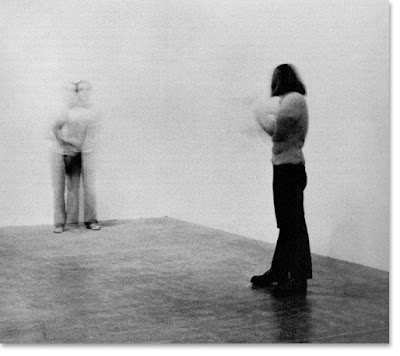 Peter Schjeldahl profiles performance artist Chris Burden and his “theater of passive-aggressive cruelty” in the May 14, 2007 issue of The New Yorker. Schjeldahl writes about some of Burden’s more current, non-performance work, but it was Burden’s earlier outrageous and outright dangerous performance art that grabbed my attention.

In 1971, in a piece titled simply Shoot, Burden had one assistant shoot him in the arm with a rifle while the other assistant photographed the act. I believe that the image above is from the exact moment of the shooting, just judging from the blurry jolt resulting from the sound of the gunshot. Schjeldahl sees such violent acts as all part of the “subculture” in which Burden was the “the most extreme and enigmatic of provocateurs” reflecting “the political disarray of the nation during the seemingly eternal Vietnam War.” 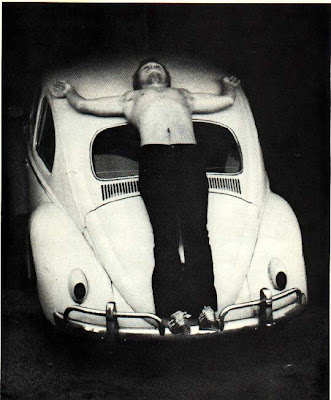 Another of Burden’s violent performance pieces, titled Trans-Fixed, featured Burden nailed by his hands to the roof of a Volkswagon (above), his arms spread in an imitation of the crucifixion. David Bowie, an aficionado of modern art, alluded to this performance piece in his song Joe the Lion in the line: "Tell you who you are if you nail me to my car."

Much of Burden’s work tells us who we are through our response to cruelty. The most interesting of Burden’s pieces decribed by Schjeldahl, titled Doomed, had Burden set up a clock on a wall and then lay on a floor beneath a leaning sheet of glass. After Burden had remained unmoving in that position for over 45 hours, a gallery worker placed a glass of water within Burden’s reach. With that act of kindness, Burden stood up and smashed the clock with a hammer. Doomed speaks volumes about modern humanity’s ease with viewing suffering and simultaneous difficulty with acting in some way to stop it. In a great piece of art writing, Schjeldahl says, “I have in mind Robert Rauschenberg’s famous intention ‘to act in the gap between’ art and life. There isn’t any gap. Art is notional. There is always only life and death.”

In a way, I’m sad that Burden’s moved on from his theater of cruelty for the loss of such artistic intensity and power. But, in another way, I understand how he’s moved on from that personally and artistically. Enduring such pain can’t be easy. It’s easier to believe in suffering for art or any other ideal when someone else does the suffering. Burden’s best work bridged the gap between art and life and life and death. Unfortunately, those gaps seem much too wide today.
Posted by Bob at 5:41 AM