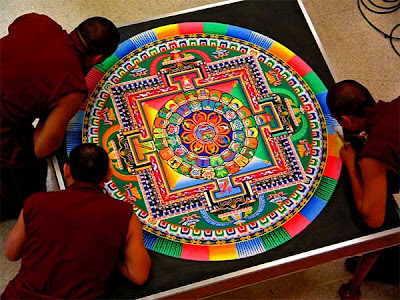 CNN’s home page has footage of a little boy stomping all over a mandala sand painting Buddhist monks had been working on for two days. (The UPI story is here.) A security camera captured all the carnage, which ends when the mother guiltily swoops in and trundles her little urchin away. (The image above is from another group of monks working on a mandala.)

I’m sure that the good Buddhist monks undoubtedly said when they saw what transpired was that it was all part of the transience of this plane of existence. At the end of the painting, they always ceremoniously sweep away the sand. I always wondered if the Buddhists looked forward to that moment of sweeping away, which this incident would have taken from them. It’s kind of like lining up thousands of dominoes and not getting to tip that first one over. What would you pay for the security camera footage of the monks’ expressions when they came in to work that next morning?
Posted by Bob at 11:16 AM

I'm reminded of a recent article published in Library Trends (Winter 2007). Michele Cloonan in an article entitled The Moral Imperative to Preserve writes of the imperative to preserve cultural monuments. She states, "But equally forceful as the impulse to preserve is the impulse to destroy." Cloonan points out that the drive for preservation is culturally linked. She quotes a Zuni spokesman: "Everything...my culture makes...is meant to disintegrate...to go back into the ground." A frightening concept for an historian.
MadSilence
http://madsilence.wordpress.com/

I agree that impermanence is a frightening concept for a historian of any stripe, but I think that it's philosophically liberating to embrace the more Eastern concept of the impermanence of life (and art). Andy Goldsworthy, who I've written about, allows his natural "sculptures" to fall back into the natural chaos entropy intends, after photographing the work, of course. I always think of Wordsworth's phrase in "The Prelude": "woods decaying, never to be decayed." The true permanance of art is in the act of creation itself, not in the individual works of art. The fact that painters still paint is more important than what has been painted in the past, because those paintings of the past truly continue to live in that continued creativity. It's a hard concept for us Westerners to grasp, but something still worth thinking about.