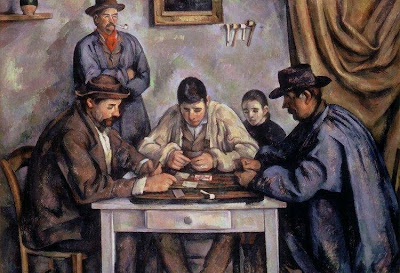 In the interest of presenting opposing viewpoints (as well as non-Philadelphian opinions) on the Barnes Foundation move to a museum row on the Parkway in Philadelphia, here’s a link to a May 4, 2007, article by Los Angeles Times architecture critic Christoper Hawthorne titled “Barnes to Downtown Philly? A Bad Move”. I’ve presented my views on the Barnes move clearly before, both here and on the member discussion board of the PMA. This one’s for you, Wm. (Cezanne's Card Players, from the Barnes collection, is above.)

The reluctance of some architects to accept invitations to propose designs for the new Barnes collection’s home spurred Hawthorne to wonder if the move was justified. Hawthorne cites the original location’s charms and value as an escape from the urban landscape of Philadelphia as the reasons why he sees it as a bad move. I agree with Hawthorne and those who resist the move to Philadelphia that the original location will be superior in terms of ambiance until the new location has had a chance to make its own history. There is a history to the original home that will certainly be lost. Where I disagree with Hawthorne and his fellow protestors regards what I feel will be gained.

Hawthorne’s “unusually satisfying” experience at the original Barnes comes from a set of “ineffable qualities of a sense of place” that I find baffling. Creaky floors, light filtering through trees, and Dr. Barnes’ eccentric presentation (even Hawthorne believes that some of Barnes ideas are “nuttier than others”) are irreplaceable in his view. It is my understanding that any new location would retain Barnes’ eccentric arrangements (but perhaps with educational wall plaques). The Parkway in Philadelphia sports some of the finest treescapes in the urban jungle, so filtered light isn’t a problem. And, personally, I find creaky floors annoying, but I’m sure the right architect can creak-ify them.

At first I found it curious that the LA Times tapped Hawthorne to write this piece rather than their Pulitzer-nominated art critic Christopher Knight, but then I saw that Knight feels pretty much the same. The Friends of the Barnes have collected Knight’s comments with those of some other critics on their website. Of course, both Los Angeles critics center their objections on the impossibility of recreating the “enchanted stature” of the Merion site (as Knight calls it), which I’m not sure outweighs the benefits of the new location’s increased access.

Hawthorne strikes an especially unattractive, anti-populist note when he worries that the new museum mile might become “a shopping mall where you can buy the experience of looking at art.” I’ve run across this fear of the masses before in “keep it in Merion” arguments and can never let it just brush by. Despite the “flagrant mismanagement” of the previous administrators of the Barnes (Hawthorne’s words, not mine), Hawthorne still somehow feels that the old home and all that mismanaged and nutty history is worth memorializing if for no other reason than to keep it an exclusive experience for the initiated few. Please pardon me if I try to break into that club and bring (hopefully) a few hundred thousand friends with me. If anyone is trying to “buy the experience of looking at art,” it is those who want to price the Barnes collection out of the reach of families with children.

Out of respect for Knight’s art expertise and the fact that Hawthorne’s looking at the situation from primarily an architectural perspective, I’m going to chalk up their opinions to the distance from which they view this situation. From Los Angeles, the Barnes Foundation appears to be a romantic tower of art, besieged by the infidels of commerce who wish to destroy tradition. From where I sit, the Barnes Foundation will either move and grow into a greater cultural institution plugged into the heart of a vibrant art community or remain stagnant and continue to shrivel into ever lessening insignificance, a precious curio tucked away into a musty drawer, safe from the messy hands of the many. Call me a romantic, but I think that this whole debate will seem silly years from now, when the Barnes collection finds a wider audience and greater fame in its new home. Sometimes change is for the worse, yes, but sometimes it can be for the better. Only time will tell.
Posted by Bob at 6:19 AM