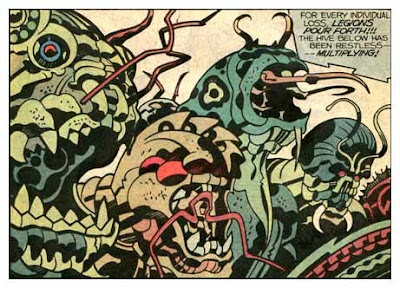 Like any other overgrown adolescent male, I’ve never lost my love for the irreverent and imaginative in cartoons and comic books. Watching the latest generation of cartoons with Alex allows me to catch up with the latest trends in animation without feeling too conspicuous.

Craig Yoe’s Modern Arf: The Unholy Marriage of Art and Comics indulged my jones for comics even further, with the added bonus of an art history angle. Yoe, a professor at Syracuse University, brings a fine arts background to the “kiddie” world of comics and cartoons and keeps one foot firmly in the adult world while resting the other gently in the world of childlike wackiness, most likely on a banana peel.

Yoe documents the influences of artists such as Dali and Picasso on comic artists such as Jack Kirby and Hy Mayer. (One of Kirby’s many amazing comic book panels is above.) Modern Arf even reproduces some comics drawn by Dali and Picasso. Picasso’s cartoon of a buxom model being painted by a monkey at an easel he most likely would have called a doodle (the line between doodle and cartoon being so fine), but Dali’s early comic strips drawn for his sister as well as a beautifully drawn storyboard for a never-filmed Surrealist movie in New York show that Dali could have been one of the greatest comic artists ever. Yoe provides a sample of comic book covers riffing on familiar Dali imagery, including the famous melting clocks of The Persistence of Memory.

The highlight of the book for me is Jack Kirby’s short comic “The Fourth Dimension is a Many-Splattered Thing.” Kirby’s fourth dimension bears a strong resemblance to Surrealist paintings and other modern art movements. In turn, Kirby’s work influenced Pop Art in the 1960s, especially the work of Roy Lichtenstein. By showing the true relationship behind this “unholy marriage,” Craig Yoe makes it respectable to look at comics as art.

Please check out the Arflovers blog for continuing irreverence and edification at the intersection of fine arts and comic artistry.
Posted by Bob at 5:46 AM