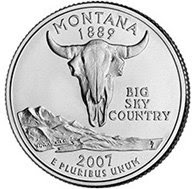 Remember when the U.S. Mint started their State Quarters project in 1999? Is anyone other than me still collecting and still interested in what images are picked for each state? The gladiatorial games of politics and aesthetics fought over these coins have yielded some weird and wacky results. Seeing the new Montana quarter (above) for the first time made me think of just one person: Georgia O’Keeffe. 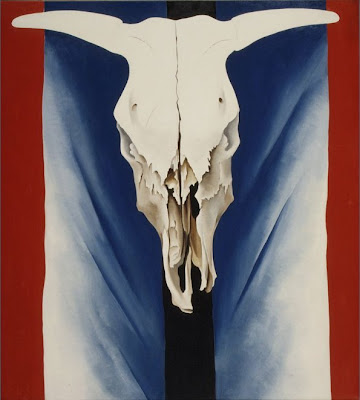 Above is O’Keeffe’s Red, White, and Blue, just one of her many paintings of sun-bleached animal skulls painted while she lived in New Mexico. I realize that horned animal skulls all look alike, at least to a city-slicker tenderfoot like myself, but to re-iconize an image that is already an icon in a different context, especially a different geographic context as widely dissimilar as Montana is from New Mexico, seems wrong. New Mexico doesn’t release their design until 2008, but I’d understand New Mexico’s anger with Montana if they were going to go with an O’Keeffe. They can still go with an O’Keeffe, just as North Carolina and Ohio both decided to lay claim to the Wright Brothers on their coins, but they’d then only create a 4-way tie for second most boring quarter design. 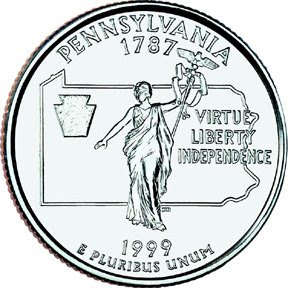 Who’s the winner of the most boring state quarter art? Why, it’s my home state of Pennsylvania (shown above), a state so unimaginative that their state quarter depicts the actual state, itself boring in an amazingly nearly rectangular way. New Jersey and South Dakota remain the only states to portray actual art on their coins. New Jersey sports Emanuel Gottlieb Leutze’s Washington Crossing the Delaware, while South Dakota takes pride in Gutzon Borglum’s mammoth sculpture of the Presidents on Mount Rushmore. Would it have killed Pennsylvania to use Eakins’ Max Schmitt in a Single Scull?
Posted by Bob at 6:24 AM