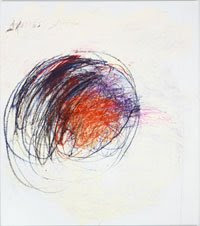 David Packwood’s post on Cy Twombly over at Art History Today (in response to Jonathan Jones' post at the Guardian calling Twombly’s art “the most powerful history painting of our time”) leads me to ask myself again an old question: Why don’t I “get” Cy Twombly?

Even Robert Hughes’ essay “The Graffiti of Loss” (via David Packwood) and Kirk Varnedoe’s retrospective fail to help me. Packwood, Jones, Hughes, and Varnedoe—all finer minds than mine, yet still can’t convince me that Twombly’s a great artist, or even (sigh) an artist at all. Not even Twombly’s father’s major league baseball pitching career, albeit for 1 month in 1921, warms up my coolness to his work.

At first, I thought that it might be Twombly’s use of oil crayons that turned me off. (I did disparagingly call him “crayon-wielding Cy Twombly” when writing of Jeff Koons.) Even pastels suffered under a misperception as a medium for children until they became popular in the late 19th century. Prejudice could be the answer, but I’d like to think that I’m aware enough of past prejudices to avoid perpetuating others, especially if I accept Twombly’s justification for using it as part of his naïve, primitive style, which I’m more than willing to do.

I’ve scratched off a failure to appreciate Twombly due to the inability of reproduction to do him justice, because I’ve spent time looking at Twomblys in the flesh at the PMA. Twombly’s suite of 10 paintings titled collectively as 50 Days at Illium occupy a room in the modern and contemporary art section all by themselves. I’ve walked through that room and studied the scribbles and graffiti-like marks, trying to understand all the fuss. (Twombly’s Shield of Achilles from the 50 Days at Ilium suite is above.) You’d think that the classical/literary allusions of his work would appeal to the bookish side of me, but that only seems to push me away by the too jarring juxtaposition of Twombly’s images and my personal concept of the classical world. When I look at Twombly’s shield of Achilles, I only see Twombly and not Twombly AND Achilles.

Perhaps only time and effort will lead me to love Twombly. I remember first encountering the music of Gustav Mahler and Arnold Schoenberg and struggling to understand and appreciate them. Placing faith in the critics, I patiently opened myself up to their worlds and have loved them ever since. Maybe one day Cy and I will be buddies, too.
Posted by Bob at 5:54 AM

After listening to singer Tift Merritt speak rapturously over Twombly's "Achilles Mourning the Death of Patroclus" which she encountered at the Centre Pompidou, I eagerly searched for it and must say I wasn't brought to tears as she was. Maybe because I didn't experience it floor-to-ceiling as she did. Red blobbety stringety encounters smaller red blobbety stringety. Maybe it's a Paris thing.