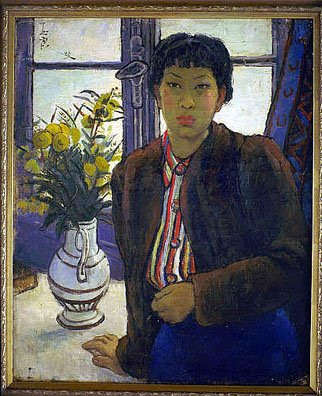 After the death of her parents, an uncle sold Pan Yuliang into a brothel at the age of 14. While working at the brothel as a prostitute, Pan Yuliang met a customs official in 1916 who helped her escape and later married her. Her husband encouraged her painting and she soon traveled to study art in Shanghai. In the 1920s, Pan Yuliang studied art in Paris and Rome, earning awards and scholarships for further study. In 1929, she returned to China to teach art and was honored as the first Chinese woman artist to paint in a Western style, taking the Post-Impressionist techniques she discovered in Europe and modeling them to her native Chinese approach. 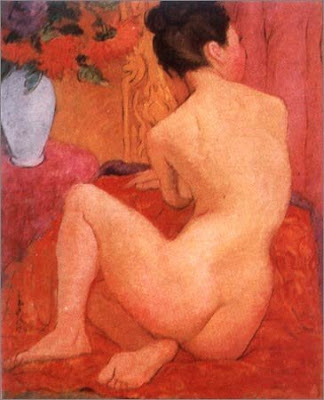 Unfortunately, Pan Yuliang soon ran into trouble with the government authorities over her use of nude models. Her Mum and Woman’s Body appears above. (More portraits of women bathers and other nudes by Pan Yuliang appear here.) Pan Yuliang soon returned to France, where she remained until her death in 1977. If she had remained in China during the Cultural Revolution, her works would have undoubtedly been destroyed as decadent and “Western.” Despite this political turmoil and artistic exile, Pan Yuliang always wished that her works would return to China after her death, which they did in 1985. A large collection of her work now hangs at the China National Art Gallery in Beijing and at the Anhui Provincial Museum in Hefei.

I can’t help but draw parallels between Pan Yuliang’s struggles against a moralistic society and those of Thomas Eakins, mainly because of their shared belief in portraying the nude body. But even Eakins’ struggles pale in comparison to the mountain of difficulties before Pan Yuliang: the death of her parents, her early life as a prostitute, the constant burden of being a woman in an ancient, patriarchic society, all culminating in the stigma of championing the depiction of the human body. Pan Yuliang’s life and art earn her a place in the pantheon of great female artists right there next to Frida Kahlo and Georgia O’Keeffe.
Posted by Bob at 5:30 AM

I just stumbled upon Pan's work after Googling around for post-impressionist work. Very lovely, and it does indeed deserve to be far better known than it is.