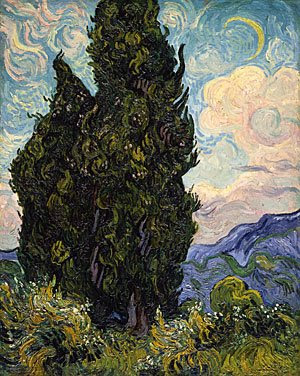 Can an artist be reduced to the sum total of his brushstrokes and gestures? Is there something beyond just the mechanics and personal quirks that adds up to a style? A new technology called Stylometry tries to apply mathematics to study and verify art. (Via Artcyclopedia.)

A team at Cornell University in Ithaca, NY, has developed software that captures the style of an artist in mathematical form to help in determining the authorship of other works by that same artist, arguing that a painter’s style is as unique as a fingerprint, at least when broken down into computerized data. This “visual signature” would assist art historians in the often difficult task of attributing unattributed works.

There are two problems I see with this. As with much of the digitization of our world, reducing Van Gogh, the first artist to be placed under the microscope, to megabytes discounts any human element in his work. (Van Gogh’s Cypresses appears above.) Art historians study their whole lives to be able to distinguish a particular artist’s style. Unfortunately, sometimes they get it wrong. Those who support the use of this software most likely want extra insurance that the masterpiece they're paying for is exactly what they think it is. I doubt that this software, even in concert with art historians, can ever approach 100% certainty on a work without iron-clad provenance to back it up. Sometimes you just have to have faith. Or maybe you can just appreciate the work without worrying about the hand behind it.

Another problem such a “visual signature” creates is in propagating the misconception of an artist as someone stylistically and technically static. I’m sure the software makers feel that a big enough cross-section of works from an artist’s career comprises a sample sufficiently large to smooth over these variables, but such a smoothing over of the sharp turns in an artist’s artistic development may only create an “approximate Van Gogh” or “averaged Van Gogh” rather than the diverse, living artist. Could you imagine Picasso’s career sampled and averaged into a single representative “Picasso”? Such an approach smells of the corporate world’s love of “branding.” Fortunately, an artist is not a McDonald’s.
Posted by Bob at 5:52 AM

Hi Bob. What an excellent blog. Well written & insightful, a pleasure to read, & a great blogroll. The blogosphere may be the last hope for artistic & literary criticism.
MadSilence
http://madsilence.wordpress.com/

I enjoy the writing of the dynamic duo of MadSilence as well. I'm not sure if the blogosphere is art/lit crit's last, best hope, but it sure is a lot of fun, and a great way to meet other art nerds around the globe.