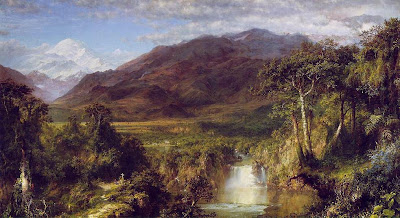 Frederic Edwin Church, 19th century American master of the showstopping exotic landscape, was born on this date in 1826. In 1859, his The Heart of the Andes (above) drew 13,000 paying viewers and then sold for $10,000 USD, the highest price ever paid for a work by a living American artist at that time.

Church studied under Thomas Cole and was a fellow member of the Hudson River School. However, Church took the lessons of Cole and supersized them. The Heart of the Andes measures 5 feet in height and 10 feet in width. When the paying public came to see it in 1859, Church set it in a window-like frame and used dramatic lighting to create the impression that you were actually there in Equador, looking out at the majesty of the Andes. The Heart of the Andes was the IMAX theater of its time.

I remember seeing The Heart of the Andes as part of the American Sublime: Landscape Painting in the United States 1820-1880 exhibit, which ran at the PAFA and Tate Britain in 2001/2002. (The PAFA doesn’t archive past exhibit content, but the Tate Britain does, so I’ve linked to them.) The PAFA did a great job in trying to recreate the room in which Church exhibited the painting in back in 1859. It was like stepping into a time machine, except for the sad realization of the impossibility of recreating the wonder of a 19th century viewer after living through the visual bombardment of the 21st century. 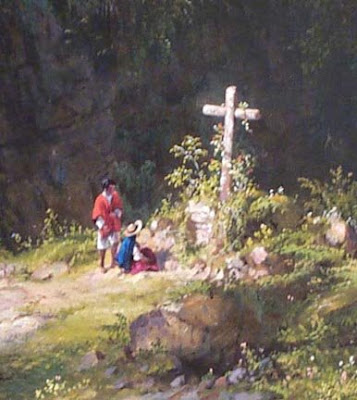 One of the most interesting aspects of Church’s technique in these grand epic landscapes was his deep focus throughout the depth of the image. The smallest details, such as the people standing by the cross above, retain their sharpness regardless of how “deep” they should appear in the painting. A viewer could stare at tiny details such as these for as long as it took for him or her to feel they had gotten their quarter’s worth (the actual admission price in 1859). 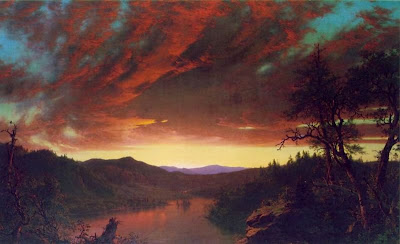 Church traveled all around the world and America, bringing his beautiful technique and showmanship style to sublime landscapes from Niagara Falls to the Middle East. (Church’s final home, Olana, shows the influence of the Middle East on the artist.) But it is his capturing of the now-lost sublime American landscape, such as in his Twilight in the Wilderness (above), that makes Church memorable today. Skies such as those in his Twilight draw favorable comparison to those of J.M.W. Turner. They also make us long for the skies of a once-pristine world that can be marveled at now only in paintings.
Posted by Bob at 5:49 AM